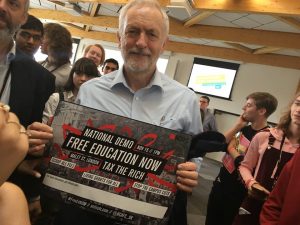 Delegates were sent a priorities ballot, preceding the conference, where they ranked policy commission topics in order. The policy commission topic ranked 1 was ‘Economy, Business and Trade’ which saw an array of motions from the one promoted by The Clarion on ‘A Publicly Owned Banking System’ to ‘Ending age banding in the national minimum wage’ and many more. USDAW submitted a motion about ‘Tackling Insecure Work’ which did not succeed in passing. Despite a general belief in the “spirit” behind the motion, many felt it was too timid or too weak in its stance. Instead, the stronger ‘Young Workers’ Rights’ motion, which called for repeal of all anti-union laws and support for young workers’ struggles, was favoured.

Second was Policy Commission: Housing, Local Government & Transport. The motion ‘Building virtuous local economies’ was generally opposed by the radical left faction. It was applying that we should adapt to government cuts, rather than proposing an opposing driving force. Conversely, the left proposed ‘Fighting to Reverse Local Government Cuts’, which unfortunately did not pass. The argument against it was that we should support our councillors, with a fear of government commissions taking over councils.

The most debated motion came from the third policy commission topic: ‘Work, Pension and Equality’. It was a motion on Universal Basic Income, which saw the first manual vote count of the conference so far. The vote was close but the motion was ultimately passed.

Jeremy Corbyn MP joined us shortly after lunch. He thanked young Labour activists for their hard work during the 2017 General Election, which saw many university constituencies turn red, like Sheffield and Canterbury. He focused his speech on many of the big issues young people face in today’s society like mental health, youth voter engagement and housing.

Cat Smith MP, Shadow Minister for Voter Engagement and Youth Affairs, chose to use her time at the conference to talk especially about the upcoming Votes at 16 bill, taking place on November 3rd. She encouraged everyone to lobby their MP to vote for the bill to be passed. Cat also highlighted the disappointment of the General Election. But quickly focused on the positives, stating that the Labour Party were ‘a government in waiting’, and reminding everyone that 2 million people registered to vote in the most recent General Election—most being young first-time voters.

There were also three breakout sessions: on Labour Students’ Housing campaign: ‘Somewhere to Call Home’, Votes at 16 and Preparing for the Local Elections at May.