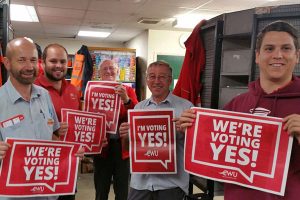 Royal Mail workers have voted 89.1 percent, on a 73.7 percent turnout, to strike over the following demands:

• No to a two tiered pension: we want a decent pension, not poverty in retirement
• With advances in automation, we want a 35 hour full time week (on the same pay)
• No company backtracking from an agreement with the CWU supposed to last till 2019
• Royal Mail wants to introduce a later work day, 9am-5pm, last letter delivery at 5pm. They want new starters to have to work these later hours. We reject having a two-tier workforce.

We’ve already made RM u-turn on their plans to make us self-fund our first three days of sick leave.

This is big: it’s indicative of the future of so many companies. Working conditions are being squeezed, companies want greater profits, and people are living longer. Companies are saying they can’t afford pensions. This is a dispute that is going to determine a lot, not just for the CWU and Royal Mail.

• For more on the CWU’s demands, see here.

Notes
1. That Royal Mail workers have voted 89.1 percent, on a 73.7 percent turnout of the 110,000 Communication Workers’ Union members in the company, to hold national strikes to push back the company’s drive for an increasingly casualised and hard-driven workforce. Their first strike, for 48 hours, will take place from 19 October.
2. That the CWU is seeking to defend its members’ pensions, prevent a later working day, win a 35 hour week with no loss of pay to spread the benefits of automation, defend union agreements and win a decent pay rise.

Believes
1. That this is an important dispute, in which the Royal Mail workers will need support from the whole labour movement.
2. Labour and other unions should mobilise at every level to support them, linking this to a vocal and active public campaign for renationalisation of Royal Mail.
3. That a renationalised Royal Mail should be democratically reorganised to benefit its customers and workforce, along the sort of lines advocated by Jeremy Corbyn in his first leadership election and in his speech to this year’s Labour conference.