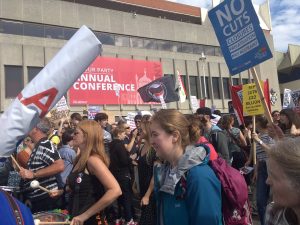 Lots of people have been saying that Labour Party conference was a huge step forward for the left. They are right, as long as you add that there is a lot of work now to do and that it won’t happen automatically or through just pushing further down the same road.

There were many more delegates, something like 1,200, and they were much more left-wing, with a clear majority of Corbyn-supporters. Apparently 13,000 people attended some meeting to do with the conference – the conference itself, official fringes, The World Transformed and other fringe events.

The average delegate or observer was much more “scruffy” than in previous years – lots of people with badges, etc, many of them young. Of course many Clarion supporters and people we know were delegates. Getting into discussions, selling the magazine (the conference special we produced as well as issue 9) and promoting left-wing causes was easy. With determined effort but not back-breaking exertion comrades collected £1,370 for the Picturehouse strike fund.

The Clarion supported and our editor Rida Vaquas spoke at a packed fringe meeting about fighting unjust expulsions and suspensions put on by Stop the Labour Purge. We held a joint social and produced a bulletin with Red Labour supporters

Anecdotal evidence as well as reports in the press suggest that the Labour right is extremely demoralised. Many MPs and members of the House of Lords did not even bother to attend the conference.

Moreover we are seeing the beginnings of a living Labour Party democracy again.

Things in Brighton were in many ways wonderful, but at the same time a mixed bag, reflecting the wider situation on the left. The atmosphere was sometimes celebratory to the point of being unthinking – one minute conference was cheering calls for dismantling the border regime, the next minute cheering Mi5 and Mi6 (literally). The conference was a mix of left-wing and stroppy and a bit back-slapping, uncritical and “follow your leader”. Thus:

• More time had been allocated to policy discussion, with pointless external speakers eliminated and speeches from shadows ministers, etc, squeezed. To some degree this time was used well. There was some interesting and inspiring discussion and contributions. More left-wing motions got submitted and passed – on the NHS, on the right to strike, on housing and other issues. On three occasions (over stopping and reversing benefit cuts, NHS privatisation and democratic control of schools) delegates used their newly established right to say that bits of the National Policy Forum reports were not left-wing enough and refer them back.

• A clear majority of CLP delegates voted to reject the Conference Arrangements Committee report after complaints about virtually all emergency motions being ruled out of order (though the CAC was saved by the union vote). Even the finance report caused a delegate to get up and ask how much is being spent on the Compliance Unit!

• The bulk of the motion promoted by The Clarion on trade union rights made it through compositing, with the result that the conference voted unanimously for a strong position on workers’ rights, including support for the Picturehouse, McDonald’s and other strikes and the demand to repeal the 1980s/90s Tory anti-union laws. That is a major advance. Momentum NHS did something similar with policy on the health service.

• Hots on the heels of the left’s victory in the Conference Arrangements Committee elections, left candidates Anna Dyer and Emine Ibrahim easily won the elections for places on the National Constitutional Committee (which are elected by conference). This could potentially be important in raising, stopping and reversing unjust expulsions and suspensions of left activists.

• The two democratic rule changes proposed by the National Executive Committee – to expand the number of elected members’ representatives on the NEC from six to nine, to reduce the nomination threshold for leader from 15 to 10pc of the parliamentary party, both passed easily with little fuss. (So did the rule change on dealing with racist, anti-semitic, etc, behaviour.)

• Corbyn, McDonnell and other’s speeches were more left-wing than previously, for instance in terms of cancelling PFI contracts and supporting strikes (though not without ambiguity).

• Delegates voted, at the instigation of Momentum and CLPD, to deny themselves the right to discuss Brexit and stand up for free movement. In some ways this discipline and ability to totally dominate the conference agenda was impressive – but it was also a total abdication of responsibility. In keeping these issues off the agenda, the “official” left did exactly what the right did last year! It would be interesting to know who made the decision that Momentum opposed discussing Brexit.

• Despite an increased number, there were relatively few motions on the agenda. That is in large part because of the procedural barriers to doing it, including large numbers ruled out. However it also seems to reflect relative lack of interest among some left activists (and certainly a lack of leadership from Momentum – see below).

• Some delegates seemed more comfortable making speeches about themselves, their experience, how bad the Tories are, how great Jeremy Corbyn is than about the motions on the agenda or specific ideas, issues and demands (to be fair, the way the conference is still organised, with many motions discussed at once, leant itself to this).

• Leading figures seemed not bothered about what is passed or not passed. At the Campaign for Trade Union Freedom fringe meeting, for instance, not a single speaker mention the motion on union rights going to conference that afternoon. A shadow minister said at the same meeting that he supports the right to solidarity strikes but it is not party policy – when in fact it was passed unanimously in 2015.

• As a result of the NEC’s call, all democratic rule changes except the ones the NEC had proposed were remitted to the forthcoming democracy review. The exception was a rule change from Brighton Pavilion on removing the need for motions to refer to “contemporary” events – the CLP’s delegates did not not accept remission and instead it was voted down. Not exactly a model of bottom-up democratisation and a stalling of the pace of reform…

The Momentum office’s role in the conference was mixed. It was more together than last year, when they had almost no intervention at all. In justice it must be said that Momentum played an important role in some of the successes described above – for instance the left victory in the NCC election and organising delegates to refer back sections of the NPF report. But again, with the exception of Momentum NHS, which is an autonomous campaign with a different political bent, they seem to have got no motions submitted and discouraged discussion of motions in their pre-conference delegates meet ups (and did not discuss it publicly anywhere else); they did not help delegates caucus and discuss, with even the daily briefings promised not seeming to materialise; and they actively prevented discussion on migrants’ rights.

Mobilising people to attend and linking them up to an app telling them how to vote is good, but no substitute for democratic organisation and serious political discussion and intervention.

The World Transformed fringe featured many interesting and useful sessions and speakers, with some real highlights, as well as showcasing many important struggles. Once again its team should be congratulated for a good event. But there were some rather glaring and it seems politically-determined gaps – what we should advocate about Labour council and cuts, for instance, and the Russian Revolution! Some of the sessions would have benefited from having more left-wing grassroots activists and fewer medium-sized names who just waffled generalities.

So, real and enormous progress, but a lot more to change to achieve even quite limited goals in terms of reviving the labour movement, let alone socialist advance. In particular:

We need a wide-ranging discussion and a big fight around democratic reforms, with the fundamental aim of a sovereign conference. The review announced by the NEC should be approached positively but not trusted. There is a real danger that it will be tightly controlled by the leadership and the big unions, with more radical proposals excluded and thus made much more difficult to pass at conference. As part of democratisation, we need a renewed fight to prevent further expulsions and suspensions, reinstate expelled and suspended comrades and create a transparent, accountable disciplinary and membership system.

We also need to push the new, left-led CAC for much more immediate and easier reforms to how conference itself functions – basic things like clear standing orders, motions being published in advance, speeches for and against, proposers getting a chance to respond.

We need a focus on policy. Clearly the leadership is becoming bolder, but before you get to the much wider questions of how to challenge capitalism or even “big” policy problems like ownership of the banks and free movement, there are still numerous gaps and inadequacies. On union rights, the NHS, social care, council housing, public sector pay and more, either the policy passed is not adequate or there is evidence it will be at least partially ignored or softened. This is not a matter of denunciation or nitpicking, but of applying pressure and seeking to firm up and develop things. Again, we need to insist that it should be conference that decides what Labour Policy is.

We need a serious discussion about what Labour councils should do to fight the funding cuts which are now reaching crisis level.

We need to build constituency-level Young Labour groups and campus Labour Clubs as vibrant centres of discussion and campaigning. There was almost nothing about this at the conference, except what Clarion supporters raised.

We need to mobilise the party, at every level, to actively support workers’ struggles, linking this to Labour policies for higher wages, security at work and, now, abolishing the anti-union laws.