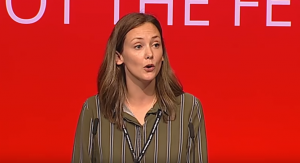 The following speech was delivered by Maria Bagnall, delegate from Charnwood CLP in Leicestershire, at Labour Party conference. The motion she was supporting, which incorporated text from her CLP, passed unanimously – establishing clear Labour policy for supporting workers’ struggles, for repeal of all anti-trade union/anti-strike laws and for positive legal rights for workers and their unions.

“Conference, my name is Maria Bagnall, I’m from Charnwood CLP, and I’m speaking to Composite 4, into which the motion from my constituency is incorporated.

“The workers at McDonald’s are amongst the lowest paid in the country, with entirely unsatisfactory working conditions. On Saturday I had the honour of attending Women’s Conference. Those of you who were there may have heard Shen speak. She was one of the first ever McDonald’s employees to take strike action. Shen is a phenomenal woman. She’s also a phenomenal young woman. Many of the workers at McDonald’s and in other service industries are young people.

“Shen told us about some of the conditions that McDonald’s workers face: bullying and harassment by managers are rife. One young woman who was a victim of domestic violence became homeless after speaking out against this practice. Workers are at risk of injury and people have lost shifts for speaking out against the culture imposed by management, who use any means they can to get the most profit out of people’s work. These conditions should not be happening in the 21st century. All workers deserve the right to safe and secure workplace.

“McDonald’s workers were penalised for joining a union, but through the utterly courageous actions of Shen and her colleagues, staff at two restaurants voted overwhelmingly to strike, with the support of the BFAWU.

“But the BFAWU and other unions could do a lot more to support workers without the onerous restrictions of the Trade Union Act and all the other anti-trade union laws. This motion commits Labour to repealing the Trade Union Act and all anti-trade union laws introduced in the 1980s and 90s. For unions to be effective, workers need the right to strike – including in solidarity with other workers and following political goals – and to picket freely.

“Strong unions should be freed from legal shackles and bolstered by positive legal rights. This is key to attacking the poverty, insecurity and inequality that so many endure in Tory Britain. This will transform society through an economy working for the many, not the few.

“The McDonald’s strikers, the Picturehouse workers and those in service industries are often young people. At the last election we saw the highest turnout of young voters for 25 years. Those young workers turned up for us: now we must turn up for them. Please unanimously support this motion – thank you.”