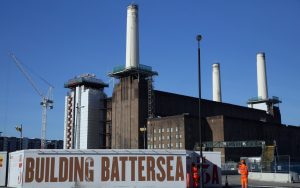 The piece The Clarion recently published on Wandsworth council and the statement from Momentum Wandsworth it linked to were unfortunately silent on the issue of the property developers marauding across the Borough.

I would like to see these things in any manifesto:

The Labour Party will scrap the proposed new bridge at Nine Elms to Pimlico costing £100m. No one wants it. It saves cyclists two minutes and pedestrians seven minutes.

Labour will stop the property developers closing Flanagan’s pub besides the dogs home. The current plan is to knock it down and put new pub on the ground floor of a new block of luxury flats. This will totally change the venue. The Castle in Battersea High Street was knocked down and redeveloped like Flanagans is meant to be. The retail space on the ground floor is still empty as I imagine that the’ rents are too high for a local community pub to meet.

Labour will stop the forceful removal of residents from the Alton Estate in Roehampton where six hundred dwellings face demolition to enable a property developer to make loads of money redeveloping the estate.

Labour will commit to mandatory ballots of residents on all estates facing regeneration and will not seek to use Compulsory Purchase orders to force residents out to make way for the property developers to make money. The developers should acquire property by purchasing it from residents in the normal way.

Labour will help Wimbledon AFC get back into Plough Lane as they redevelop the dog track.

Labour should commit to raise council tax levels to the average of other central London boroughs. This has to be an upfront commitment as one of big problems has been the refusal of either Tory or Labour in Wandsworth to raise the taxes to pay for services. The culture of low tax has to be exposed as a culture of dire services. We no longer have meals on wheels, home help is the bare minimum and youth services are minimal.

Labour should commit to looking at new rail stations on the London Overground. First between Clapham Junction and Wandsworth Road. Second reopen the Battersea High Street station that was closed during WW Two between Clapham Junction and Imperial Wharf. Hammersmith and Fulham Council opened three new stations further on this line. There have been no new stations in Wandsworth.

Labour will seek to reroute Crossrail 2 back to the original plan to run a tunnel from Clapham Junction to Tooting Broadway. There are already four rail tracks between Balham and Clapham Junction so there is no need for additional rail capacity between the two stations. More frequent services is a cheaper option. A tunnel from Tooting to Clapton Junction would ease pressure on the Northern line during rush hour at Tooting Bec to Clapham South.

Labour must talk to the Green Jobs Alliance about what should be in the manifesto on clean air and green issues.