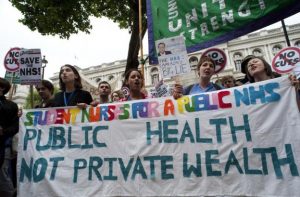 A massive development at Labour Conference. Fantastic news. I wil provide a bit of context first then give details of the motion we’ve passed unanimously itself.

Jonathan Ashworth gave a great speech on the NHS earlier. Lots of really good content and there is a real commitment there.

However, I was also listening for what he didn’t say. He did not say that the NHS would always be publicly provided and owned (rather than just publicly funded). Nor did he mention the NHS Reinstatement Bill (drafted by Allyson Pollock and colleagues) which is referenced in the motion.

The correct terminology is crucial and necessary if creeping privatisation is to be adequately opposed. Because terminology translates into real policy. Unfortunately Ashworth did not use that terminology.

Former Shadow Secretaries of State for Health (such as Heidi Alexander) also resisted the use of that terminology, they resisted expressing opposition to the 5 Year Forward View, and they resisted commitments to reverse NHS privatisation in full.

Well today, just now, we the members, strengthened the ability to stand up to those pressures…

Conference delegates just voted for a fantastic NHS motion which will give the tools needed to truly save the NHS.

• Oppose the 5 Year Forward View
• Reverse all privatisation and PFI
• Include wording endorsing the priniciples of the NHS Bill
• Affirm that the NHS should be publicly owned, funded, provided and accountable.

How did this motion get passed?

Educational work by countless NHS activists inside and outside of the party for months and years. Draft motions written and revised by a range of committed and experienced campainers. Multiple CLP’s from around the country submitting motions. Co-ordinated efforts of Momentum NHS, the Socialist Health Association and others in the drafting of and dissemination of the motions. And, crucially on Sunday night elected delegates to conference spent hours (until 11pm) thrashing out the final composite motion. The delegates were united and faced down attempts by some in the labour “machine” who wanted to water it down.

This motion will now need to be translated into fully worked-out policy proposals and vocally advocated for by Jonathan Ashworth.

However, the real battle will begin on the very first day Corbyn takes office after the next general election. We will have to fight tooth-and-nail to implement this policy: to make it a reality. We will have to do this against an array of opponents…both the obvious ones and the ones who have yet to declare themselves.

• Thanks to Yannis for letting us republish this.