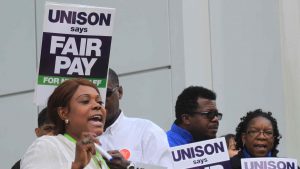 On the last day of Labour Party conference, Angela Rayner – the Shadow Education secretary – made a speech which included the one thing many workers will be most disappointed to hear from Jeremy Corbyn’s frontbench: that a Labour government would not meet the incredibly moderate union-led demand for a 5% pay increase for public sector workers.

An increase so moderate that if implemented would barely scratch the surface of the real-term pay-cut experienced by those of us working in the public sector over the past decade.

Disappointing stuff, and foolish, but not by any stretch unsurprising or unprecedented. Wage restraint, draconian incomes policies and attacks on workers fighting for a fairer slice have been the one thing that has consistently brought every single Labour government into conflict with the workers’ movement.

In 1945 the Attlee government sent in troops to crush transport workers in a dispute over wages. In 1966 the National Union of Seaman – including then firebrand shop-steward John Prescott – led a wage strike against the Wilson government and in 1978-9 a strike by almost every union in one capacity or another saw the Winter of Discontent storm against the proto-Thatcherite incomes policy of the dying embers of the Callaghan government.

More recently, the Blair and Brown administrations faced more timid strikes from the by then much weakened public-sector unions over pay. Famously the FBU in 2002 but also teachers and civil servants.

Pay is not the only metric by which a society can or should judge quality of life, but the amount of disposable income workers have is not a bad yardstick and nor is the ability for workers to afford a decent home, food and other essentials. To concede to the Tories the argument on affordability on something so fundamental to workers’ well-being is little short of suicidal.

Nor does it fit into the Keynesian economic narrative presented by John McDonnell – that the increased purchasing power and tax base of well paid workers is an economic stimulant.

But there is something deeper here too – the side which any Labour government or shadow government takes.

Workers striking at Picturehouse, McDonalds and UAL (to name only a few) will not be impressed by the news that Labour accepts the affordability argument on public-sector pay. It’s the same argument they are shamelessly told by the millionaire CEO’s and shareholders that run their respective corporations. Screw 5%, there are precarious workers in London who require at least twice as much more from their private sector employers to allow them to stop living in overcrowded slum conditions working 60-hour weeks.

If a Corbyn/McDonnell government is going to fulfil its promise to put the ‘Many’ before the ‘Few’ then it needs to learn the lessons of all previous Labour administrations. Understand that much of the hardship experienced by working-class people is in their pockets, and – as a minimum – pay the debt owed to workers and reverse the pay cut of the past decade.

If it won’t, then the unions will need to mobilise pressure – including ultimately action – against them.