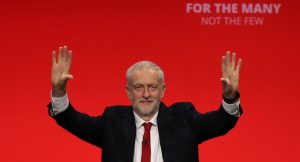 For what happened before Wednesday, see here.

• The three rule changes proposed by the National Executive Committee – reducing the number of nominations to run for leader from 15pc of the Parliamentary Labour Party to 10pc; adding three new CLP reps on the NEC, bringing the total to nine; and a disciplinary statement about those judged guilty of racism, anti-semitism, Islamophobia, sexism, homophobia and other forms of discriminatory behaviour – all passed. We are told that the last, which evolved from a rule change proposed by the Jewish Labour Movement, received 97pc of affiliated unions’ votes and about 80pc of CLPs’ votes.

• The one rule change not remitted to the democracy review, on removing the “contemporary” criterion from policy motions, was defeated due to union votes but received a very clear majority of CLP votes. The unions will have justified voting against on the grounds that they are committed to the review.

• Jeremy Corbyn made a well-received speech which included new rights for tenants and opposition to gentrifying regeneration schemes, promising regeneration “for the benefit of the local people, not private developers, not property speculators”; nationalisations as well reference to “new participatory forms of management” in nationalised industries; and unions “freed of undemocratic fetters on their right to organize”. For the full text see here.