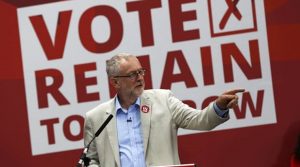 Leading people on the right or self-styled “moderate”* wing of the Labour Party are making a fuss about Momentum, in defence of the leadership, keeping the Brexit/free movement debate off this week’s conference agenda.

It is understandable why left-wing delegates who did not want Corbyn to suffer a defeat went for this, but Momentum (and CLPD) were wrong to do it, both because the issues of Brexit and migrants’ rights are so important (and the leadership needs correcting on them) and because conference has been denied the opportunity to debate this hugely important issue (sure, with its own consent). Left-wing activists should organise to call those who made this decision to account and challenge them politically.

However, it would be foolish to think that most of the leading “moderates” are either genuinely concerned for party democracy or sincere and consistent on the issues. On both most of them display large elements of anti-Corbyn opportunism. (What I describe here largely concerns the leading people on the right, not necessarily everyone sympathetic to some of the things they say, especially on this issue.)

Dominating the conference till this year, the right specialised in keeping controversial issues it feared losing on off the agenda – and by far less democratic methods than winning a prioritisation vote. In fact, even this year, the out-going, right wing-led Conference Arrangements Committee has ruled out numerous motions – on nationalising the banks, for instance, and on stopping arms sales and military support for Saudi Arabia. It ruled out 24 of 26 emergency motions, including all 23 from CLPs – and, please note, TSSA’s emergency motion on Brexit and free movement.

Much of the left leadership’s record on democracy (for instance in Momentum) is poor, but the idea that we need lessons from those who have spent thirty years attempting to suppress every spark of independent life in the Labour Party and labour movement – and are continuing to do so, though with less and less success – is absurd.

On the substantive issues too, people on all sides have short memories.

It was only last year that the right, then much more in control of the conference, worked to keep Brexit and freedom of movement off the agenda, because it feared that delegates would vote to defend free movement! Like Momentum and CLPD this year with eg rail, last year the right championed the uncontroversial issue of child refugees – helpfully put in a different subject area by the CAC – precisely in order to stop free movement being discussed. (Under Blair the Labour right attacked refugees while encouraging migrant workers to come to Britain; now they claim to be pro-refugee while reviling migrant workers.)

Last year Jeremy Corbyn was still standing firm(ish) in defence of free movement – before he gave in, after many months of right-wing and Stalinist and media pressure and with no support from Momentum as its office, directed by Jon Lansman, ignored its democratically agreed policy.

Remember the arguments during last year’s leadership election and still being made now – that Corbyn was “soft on immigration” and so couldn’t appeal to “working-class voters”. No doubt many “moderates” genuinely believe in migrants’ rights and are happy to take a more liberal position. But the idea that their leaders are consistent advocates or reliable allies in this struggle is wrong. Note that their motions for conference on the single market did not mention migrants’ rights or free movement (unlike the motions from the Labour Campaign for Free Movement). The right pitched these issues only when they wanted to appeal to people on the left.

In the coming arguments it would be absurd to rule out temporary and limited tactical alliances with people on the right of the party who are willing to stand up for free movement. But the left needs to maintain fierce independence and hostility at all times, including by exposing the right-wing leaders’ real record and motives, and to seek to take the lead in this fight.

* Apparently we are no longer allowed to say “the right” because it offends people. On one level I don’t care what we call them. But
i) Whinging about being called “the right” (which clearly means the right of the Labour Party), from people engaged in a determined campaign of name-calling, lying, cheating, bullying, expulsions, etc, is a bit rich.
ii) Their conduct is far from “moderate” and so are many of the positions they spent years defending, ie privatisation, PFI, growing inequality, “flexible labour markets”, etc – not to mention migrant-bashing – under Blair. I am proud to be “extreme left”, but what the Labour right have promoted and are still reluctant to break from is not moderate social democracy but a fairly extreme version of neo-liberalism.