Apart from a small but welcome demonstration calling for Iain McNicols’ resignation on Sunday morning, the Sunday evening fringe meeting organised by Stop the Labour Purge seems to be the only organised event at the Brighton Labour Party conference raising the issue of unjust expulsions and suspensions of left-wingers from Labour. It was packed out, attended by about 80 people during the course of the evening. There was lively debate, useful discussion and determination to organise to take the campaign forward.

The meeting was chaired by Mark Sandell, expelled chair of Brighton District Labour Party (which after its elections were annulled, was broken up until three CLPs, all of which the left won). The speakers were: Greg Hadfield, suspended secretary of Brighton DLP; NEC member Rhea Wolfson; one of Wallasey CLP’s conference delegates; Bakers’ Union national president Ian Hodson; Charlotte Austin of Red Labour; and Rida Vaquas, who sits on the Momentum National Coordinating Group and is a Clarion editor.

There was also a large number of contributions from the floor, and some lively discussion. Comrades from across the country told stories about their individual cases of expulsions or suspensions, or about measures taken against their CLPs.  There were some disagreements on the issue of anti-semitism, with different assessments of whether it is an issue in the Labour Party at all. However, everyone was united on the way the Labour right and party machine has used this issue as an excuse for witch-hunts and administrative suppression. 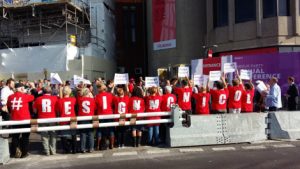 Although Stop the Labour Purge fights for rights for all Labour Party members, the dominant tone of the meeting was, of course, clearly left-wing. A number of speakers linked the issue of witch-hunts and party democracy to the struggle to make Labour into a force that helps the working class fight: Charlotte Austin, for instance, talked about measures taken against a Durham Labour Party member who has championed the Durham teaching assistants in struggle against their county council.

There was consensus that members fighting on these issues have received far too little help from the leadership, and that we need a grassroots campaign to lead the way as well as pressuring our leaders to do the right thing. Now, when the right is in many ways on the back foot and there have been few (though not no) expulsions since April, is the time to push for reinstatements and measures to prevent a revival of the purge.

With that in mind we agreed a number of proposals: coordinating a submission to Katy Clark’s review of Labour Party democracy; organising a delegation to see Corbyn or McDonnell; promoting the statement recently launched by Red Labour and Stop the Labour Purge; and launching as many local campaigns around individual cases as possible. Stop the Labour Purge will be holding an organising meeting in late October or early November to push this work forward – more information soon.

The meeting was followed by a joint Clarion / Red Labour social, joined by comrades who had been at the STLP meeting but also many who had been at other meetings and events during the evening.