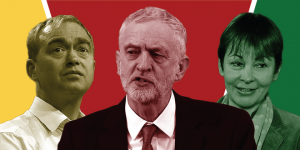 One interesting and important strand of discussion at workshop on “radical democracy” held at the The World Transformed was about the so called “Progressive Alliance”.

Of the platform speakers, broadly speaking, Janine Booth and Jon Lansman opposed the idea while Jeremy Gilbert and Clive Lewis were in favour (an interesting alignment, since Janine and Jon clashed on a number of other issues, particularly the lack of democracy in Momentum).

Jeremy and Clive both argued that the Labour Party is not the only “progressive” political movement in society and that it has to reach out. They argued that if Labour had pursued tactical alliances in various seats in this year’s general election Jeremy Corbyn would now be prime minister.

Janine responded that the Labour Party and labour movement should of course try to work with “progressive” social movements of all sorts, and seek to become a “progressive alliance” in themselves, but that making electoral pacts with non-labour movement parties such as the Greens, the Scottish nationalists and above all the Lib Dems would both weaken its ability to act as a class-based political force and undermine the kind of nation-wide enthusiasm it was able to generate in the last general election.

She disputed Clive and Jeremy’s electoral maths but also pointed out that even if it worked the result would not be a Labour government but a coalition with the likes of the SNP and the Lib Dems, far from desirable from a left-wing point of view.

Clive cited the very near-to-hand case of Caroline Lucas as a non-Labour left-wing politician that Labour members might want to support. Clearly, however, that case, even if you accepted it, does not justify the Progressive Alliance as a wider tactic.