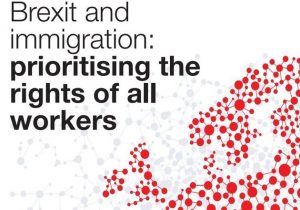 Big disappointment that freedom of movement was not discussed at Party conference. Conferences should be about debating differences not only giving predictable 99 percent near universal acclamations.

All the indications are that freedom of movement would have safely won if it had been debated.

Before the priority vote, a 1,000-strong demo took place outside conference largely organised by Lib Dems and Greens. I would guess at least 20-30 percent of demonstrators were migrant workers. There are a great number on the South coast. These people and their friends are seriously concerned about the mixed messages from the Party.

I was loudly selling Clarion to the demonstrators with its free movement front cover and many articles on the Labour Campaign for Freedom of Movement. There was excitement when I told them that we might get freedom of movement debated and passed at Labour conference.

I had a great response. Demonstrators were forcing on me ten pound note contributions – that doesn’t often happen!

The lessons of Labour’s success in the recent general election is that our policies need to be simple and clear. No ‘ifs’, no ‘buts’.

We will see what the NEC statement says today. I fear those migrant workers will scratch their heads, if they even read it.

Labour’s needs to say clearly, as Corbyn said last year, that immigration is NOT a problem. Capitalism, exploitation are.

Solidarity with migrant workers. Fight on for freedom of movement.