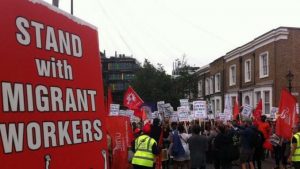 This year there are a number of motions to Labour Party conference covering different aspects of Labour’s attitude to Brexit, free movement and the single market. The Clarion has backed the Labour Campaign for Free Movement motion which Labour to support freedom of movement and not give up fighting for migrants’ rights in the face of a renewed push by some in the party to go for an extreme hard Brexit.

Motions will be heard composited following a process of prioritisation by Labour delegates and the affiliated Trade Unions. The Unions have chosen to prioritise Growth & Investment, Public Sector Pay, Workers’ rights and Grenfell. This guarantees these issues will be heard because of the size of their vote.

Momentum and the Campaign for Labour Party Democracy are recommending that delegates prioritise Housing, the NHS, Social Care and Rail. Both Momentum and CLPD spoke explicitly against discussing Brexit at this conference and have called on delegates not to prioritise it.

At the CLPD rally, the meeting was closed before there were any contributions from the floor, due to the many speakers and a lack of time. Therefore, left delegates were only able to speak to individuals at the end of the meeting to put forward an alternative view.

There has been a consensus drawn between the Centre Left Grassroots Alliance members of the NEC, CLPD and Momentum to not allow conference floor debates on policy that could push the Corbyn leadership forward. We think this is a mistake, a healthy and vibrant left will debate and discuss its differences. Deflecting questions around Brexit, and pushing it into the long grass while the dominant narrative is around curtailing free movement shows a failure of solidarity with migrant workers, who are often at the forefront of the struggles Labour should be throwing all our support behind.

For their own reasons, particularly to back the Labour Single Market Campaign motion, Labour First have called for Brexit to be one of the prioritised subject areas.

The failure of the organised Labour left to discuss Brexit on its own terms will guarantee attacks by the labour right, about the collective failure of the left to discuss Brexit. It is undoubtedly true that the left is divided on the attitude to take to Brexit and on free movement. As a debate at The World Transformed showed on this topic there is substantial opposition to free movement among sections of the Labour left. To fail to debate the issue at all shows a complete failure to challenge the dominant narrative that free movement has driven down wages, social conditions and is a policy that Labour should champion curtailing as part of its Brexit strategy.

As Maisie Sanders, delegate from Lewisham Deptford CLP, argues “Debating the issue of free movement is necessary to tear down the myths that migrants are to blame for problems caused by a government of the rich. The Left should have this debate openly and on our terms.”

Clarion supporters will be leafletting with the Labour Campaign for Free Movement from 9am tomorrow outside the conference centre, calling on all delegates to prioritise Brexit and to vote in favour of free movement. If you agree, join us.