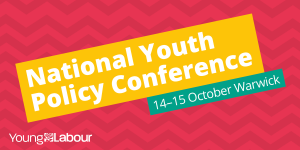 Young Labour’s national policy conference takes place 14-15 October at Warwick University. Young supporters of The Clarion are working with other left-wingers to submit a series of motions. Each motion needs a proposer and ten seconders who are individual party members under the age of 27: you can submit motions here. The deadline is 2 October.

The following motion has already been submitted. We will be advertising more motions to get support for their submission over the next week.

If you’d like any help with writing or submitting a motion get in touch: theclarionmag@gmail.com