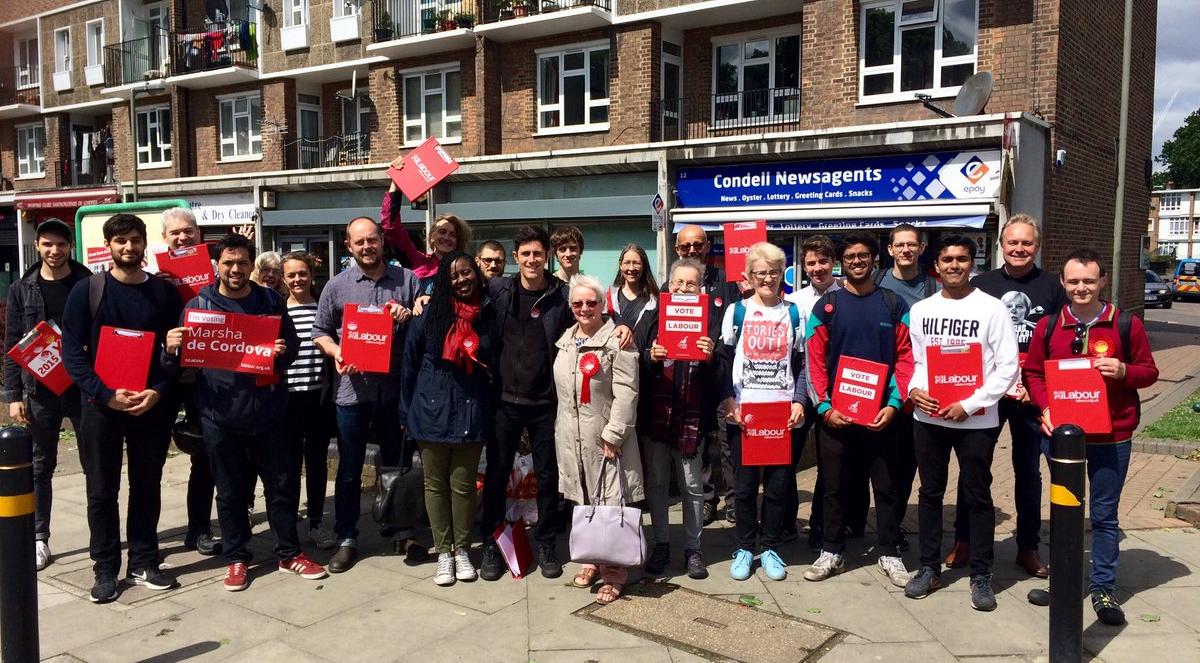 In common with many Momentum members and supporters my early experiences as a member of The Labour Party weren’t very positive. Suspicious looks and even outright hostility from some quarters was the norm.

Yet for months a small group of us plugged away, outnumbered by members who were either sceptical about the Corbyn project, or determined to stop it in it’s tracks, we nonetheless spoke at meetings, went canvassing, delivered leaflets and engaged new members.

Then, following the sad loss of a much-loved local councillor in late summer 2016, a By-Election was called in Queenstown in Battersea, a key target for Labour which only held one of the three seats there. The Tories thought they could win back the seat easily: Labour were polling badly and had only won the seat by 60 votes in 2014.

A young man from the left put himself forwards and actually got selected, we were lucky that in addition to having good politics he was well known and liked as a member locally. The campaign that followed was transformative, both for the party locally and for the left.

Hundreds of Labour members and supporters from across the borough and beyond, many of them Momentum members and supporters, came out over the following six weeks of campaigning. In particular these canvassing sessions featured many more young and BAME people than was usual, many of them canvassing for the first time, and alongside longstanding members this made for an atmosphere of real excitement on many cold and dark evenings last autumn.

On the day of the By-Election itself more than 150 people helped get out the vote, a pretty incredible number for a ward by-election. There was a sense of excitement on the two large estates in the ward where this kind of Labour presence hadn’t been seen in some time. At the count that evening the results were incredible: a swing of 10% to Labour, and a majority of nearly 600. The Labour group and local activists were blown away, this kind of result meant we could win the council in 2018 (something that previously seemed outlandish).

For those of us on the left the results were a vindication, and a sign of things to come. One thing I had heard repeated time and again since joining was that low turnout on the council estates in Battersea was an inevitability. This conclusion had even featured in the written report of the parliamentary candidate in 2015, and repeatedly I was told that, no matter how many times you speak to non-voters on the estates you won’t change the turnout.

In one polling station in Queenstown in last November’s By-Election, one that exclusively serves an estate, the turnout was double what it had been in the 2015 General Election, meaning hundreds of former non-voters had voted.

When the general election was called in April of this year the received thinking was that Battersea was un-winnable. An 8000 Tory majority in a bellwether seat led both the London Region and LCF to adopt a defensive strategy in Wandsworth, calling on members to campaign in Tooting to ensure Labour held that seat.

On the left we weren’t happy with this defensive strategy. The Tories wanted to crush the Corbyn-led Labour Party at the polls but we knew that this was our chance, what we’d been waiting for all along. The chance to fight for socialist policies and start to build a different Britain.

When we found out Marsha De Cordova had been selected as the candidate, a brilliant local activist, Lambeth Councillor and Corbyn supporter, we threw everything we had into it. Over the seven weeks of the campaign the canvassing sessions grew steadily, and in the final weeks exploded.

With Labour members, in particular Momentum supporters, from safe Labour seats across London pouring into Battersea we saturated the big estates that were our main targets but we also managed to canvass wards like Balham and Fairfield which were thought to be slim pickings for Labour, and the returns we were getting were encouraging. As polling day got closer there was a palpable shift in the mood, especially on estates, with a real sense of excitement and handmade posters backing Labour appearing all over the constituency. We even saw handmade leaflets backing Corbyn’s Labour in letterboxes, nothing to do with either Labour or Momentum. Something big was happening.

Yet still I was greeted with scepticism from some quarters when I said I thought we could win it, and a few repeated the same disproven truism that we couldn’t increase turnout on estates. In the event we exceeded even our own expectations with a 2000 majority for Marsha and a 10% swing to Labour.

Now our sights are set firmly on Wandsworth Council next May, and a new sense of unity and positivity in the constituency is helping us prepare another massive campaign. Wandsworth is the jewel in the Tory crown and losing it will be a huge coup for Labour.

Of course we don’t want a Labour Council just for the sake of it, Wandsworth provides only the most basic of services and has contracted out just about everything that wasn’t bolted down. The lack of good quality local services has a real and destructive effect on the lives of local people, a Labour council could change all that, which is why we put together this statement as local Momentum supporters on what we want to see in Wandsworth.

Our work changing Labour, both locally and nationally, is far from done but we have shown what Labour can achieve with the right policies and with a democratic, member-led party and movement. Now we have to keep working, and bring more people into active membership, to make that a reality.