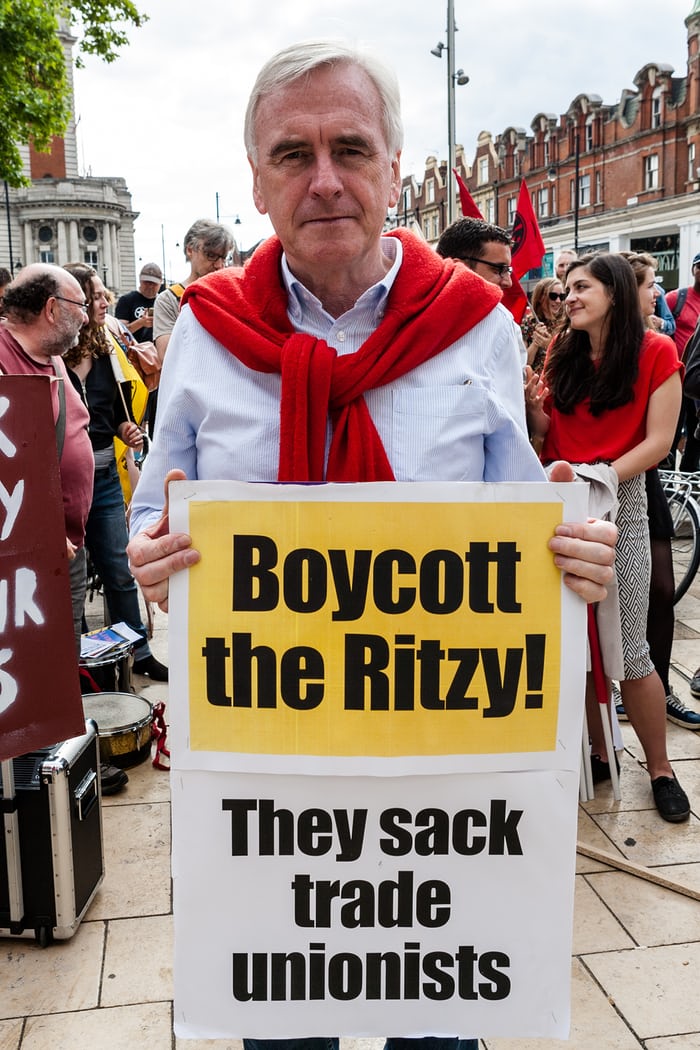 The Picturehouse dispute over the cinema chain’s refusal to pay the London Living Wage to its staff, shows no sign of ending. Cineworld, the multi-national who own Picturehouse, seems determined to try and sit out the strikes and, if it can, break the union BECTU where it is strongest ­ the Brixton Ritzy.

In June the bosses sacked four of the union reps at the Ritzy on trumped up charges and another at Hackney PH. This spurred the supporters of the strike in Lambeth to launch a “community picket” calling on PH members and pcustomers to boycott the Ritzy and its profitable bar/restaurant in the centre of Brixton. This picket started at the end of June is now into its tenth week.

It has involved hundreds of trade unionists, Labour Party members and community activists coming down early evenings to give out leaflets, explaining the dispute and discussing with customers the issues surrounding the strike and victimisations. In its early stages it ran alongside the day and weekend strikes called by BECTU at the cinema. These are now suspended. BECTU members across Picturehouse have reballoted, voting by large margins to continue striking for demands which now include the re-instatement of the sacked reps.

The community pickets have included a number of rallies, especially on strike days. The local MP Helen Hayes has been along, leading trade unionists from the PCS and other unions have attended, and John McDonnell and Owen Jones came to one of the strike rallies over the summer. Most recently, September saw Chris Williamson MP came down to a rally, which on a Monday evening was over 70 strong.

While local Momentum and LP members have been the backbone in organising and staffing the picket lines one notable absence from the scene has been local Labour councillors. Lambeth Council, run by the Blairite Progress faction, claims to be a “living wage employer”, paying not only its own staff the London Living Wage of £9.75 but supposedly asking its contractors to do the same. But when it comes to Cineworld it seems different rules apply.

Recently the council entered into a “partnership” with Cineworld to open a new cinema on the site of one of the borough’s libraries in West Norwood. This library lay empty for years because the council said it could not afford the £800,000 or so needed to modernise and repair it ­ in this time its lead roof disappeared. Being a Progress council the search began for an upmarket cinema chain to develop the whole site ­ this was Picture juse with its arty cinemas and cafes.

Suddenly money became no object and secret contracts were signed handing over millions of pounds to Cineworld to build a plush cinema with a small library attached. When they found asbestos Lambeth said, “no problem, well pay for its removal”. Quite soon Lambeth Council tax-payers discovered that £3.5 million of their money was being handed over to the multi-national Cineworld, a company that recently declared record profits £93.8 million after tax last year. To add insult to injury Picturehouse were offered a five year rent free period as well! The whole deal was originally sold on the basis that it would bring income into the council and part finance the library:­ some hope.

But what about the Living Wage? Surely the council had insisted as part of this lucrative deal for the cinema that the London Living Wage would be paid. Well yes, this is what a cabinet report announced in to the council in March 2016: “The project supports Lambeth’s Social Value Framework with the Building Contract and Development Agreement with Picture House including the London Living Wage”. Clear commitment then? Well not quite.

Following up on reports that the Living Wage was not going to be paid at the new cinema a Freedom of Information request discovered that the London Living Wage (LLW) was never in the contract from the start! Now having been caught out, the cabinet are saying the March report ³doesn¹t explicitly confirm that the LLW will be included in the wording of the development agreement.” Black is white for Progress!

When it comes to cosying up to big business or siding with the workers we always know which side Blairite Labour will come down on and in this case it’s a union busting multi-national. As always it will be down to the workers themselves, with the ongoing support of rank and file trade unionists and Corbyn supporting LP members to win this struggle.