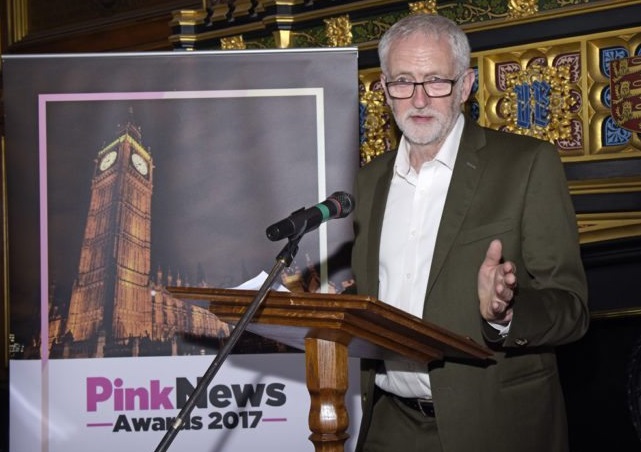 Jeremy Corbyn recently spoke at an event held by PinkNews to mark the 50th anniversary of the partial decriminalisation of homosexuality in England and Wales. He said:

“We must advance trans rights, and discrimination has gone on too long. The Gender Recognition Act does not allow trans people to self-identify their gender and forces them to undergo invasive medical tests. I believe that is wrong. Theresa May told Pink News that ‘changes need to be made’ but failed to include anything on this in the Conservative Manifesto. So, we say to her today, Labour will help you keep your promise. Bring forward a Bill to update the Act and improve trans rights and Labour will back you. You can give your MPs and the DUP a free vote and Labour will make it law.”

An article on fairplayforwomen.com claims that Corbyn is throwing women under the ‘trans bus’ by supporting these changes. They argue that allowing trans people to self identify opens the door to unscrupulous men somehow posing as women to gain advantages. It uses scare tactics about women’s refuges being invaded by ‘penis owners’ and some spurious references to unreferenced statistics. “And it’s not just a few people – at some schools, over 25% of the kids identify as trans – which for many of them does mean a lifetime of hormones and surgery to try and become something biologically impossible.” This transphobic article erroneously claims that by enabling transgender people we somehow disable women.

Is there a legitimate question to be asked about the mechanics of anything gender based in politics? Of course there is, but those questions should be coming from a place of assumed equality. A transgender woman belongs in a women’s caucus as much as any other woman does to suggest otherwise would only lean to puritan biological bigotry. When did we ever decide that refusing to take a step down a path of equality for threat of abuse was better than taking that step and dealing with the abuse IF and when it occurs.

The article claims that Corbyn’s proposal simply removes waiting times and that by enabling people to self identify without some stressful wait, and allowing people to become a woman by simply stating “I am a woman”, somehow erases all sex-based oppression. This summation is absurd. The oppression still exits. Their leap to male and female categories becoming defunct is again a giant, assumptive, scaremongering step. This law won’t change the day to day operation of a cis-gender person. It will simply remove a chunk of nastiness from an already difficult transition for a transgender person.

Would those wanting to deny the transgender woman entry to a women’s club of some kind accept her if she was tested and proven? A cross party inquiry reported in Jan 2016 that: “The requirement for trans people to produce a doctor’s letter in order to change the gender shown in their passport inappropriately medicalises what should be simply an administrative matter. This requirement must be dropped.” It is appropriately described as an ‘administrative’ matter here. Only by simplifying gender and treating it in this administrative manner can we move along the path of gender fluidity and equality.

Chimamanda Ngozi Adichie was asked – “If you’re a trans woman who grew up identifying as a man, who grew up enjoying the privileges of being a man, does that take away from becoming a woman? Are you any less of a real woman?” in an interview for Channel 4, she responded with, “So when people talk about, you know, ‘Are trans women women?’ — my feeling is trans women are trans women.” She’s right, trans women are trans women, but only in the same way that black women are black women and Muslim women are Muslim women. The spiral of privilege when it comes to feminism cannot end with biology? It cannot end with a perfectly formed vagina! Will I be denied a right to sit on a women’s caucus if I undergo a mastectomy or discover infertility, is my biological femininity somehow changed? The right to be a woman is not defined by science and genetic sex but by your gender, how you SELF-IDENTIFY, are we really ready to be scared into believing that trans women are so privileged because they started life as a man that they cannot understand our plight? We aren’t closed minded. We aren’t threatened by diversity, we’re fighting for it and our trans sisters are fighting that fight tooth and nail along side us.

Deanna Keenan is of mixed heritage African American and Irish. She has experienced some difficulties with a few members of the Black Lives Matter movement. Being told that she has experienced too much privilege as a person with paler skin. A lesser chance of experiencing police brutality for example. She called out to the movement in her article and I believe we can find an empowering message in this for trans women and trans men, “When the whole of the Black community accepts me – and others with the same intentions and racial ambiguity as myself – the Black Lives Matter Movement will only grow stronger – it will prove to White people that nothing, not even the fact that someone has White directly in their ancestry, will break us. We will always stand together and we will fight until our bodies and the bodies of our loved ones are protected against outside harms.”

The oppression we face as trans men or trans women, Muslim or Black, poor or middle class is driven by a government currently trying its best to segregate us and pit us against each other so that we don’t see past the reach of the stones we’re throwing at each other. A movement never MOVED by segmenting and bickering, it only takes strides by linking arms with those feeling the same oppression. Lets look up from the bitter fights like this one and see the root of the real oppression we all feel and then as a class we can free ourselves regardless of gender, race or religion.