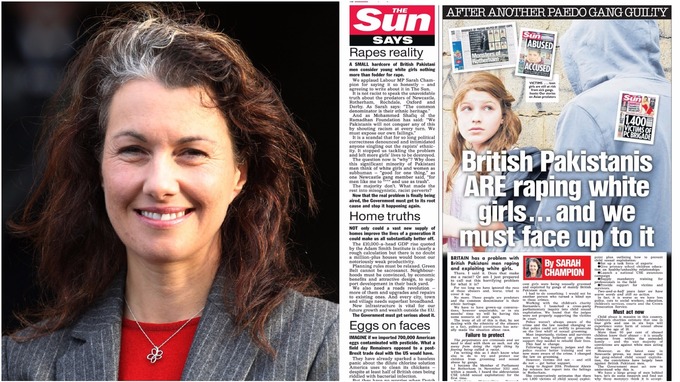 (This article was written in mid-August)

Rotherham MP Sarah Champion has been, at best, very foolish.

Was it wrong to write in hyperbolic and frankly inaccurate terms? Yes.

Will racists feed off this? Yes.

Are most Pakistanis appalled by people who abuse young girls? Obviously.

Was writing in the Sun a bad thing for a Labour MP to do? To put it mildly.

At the same time, there is in some sections of the left a rush to assume that the motive for writing about such a topic at all can have been nothing but a racist vendetta. Considering Champion’s history as a politician and before that a worker in charities dealing with child sexual exploitation, I very much doubt she is some sort of anti-Pakistani or anti-Muslim bigot.

Straightforward racists such as those the Sun panders to and employs probably believe that most Pakistanis think sexual abuse of young white girls is fine; that most sexual abusers in this country are Pakistani/Muslim; and that it would matter less if the victims in question were non-white. I doubt Champion thinks any of that. I would guess she is sincere in her concern about abuse — which of course makes it even worse that she behaved in this way.

Anyone under the impression there is no link between growing up in a culture where “honour”is sacred, where there is no outlet to have a reasonable discussion about sex, where a woman is seen as respectable if she covers up, is “modest”, is married and so on (the implication being that those who are unmarried, and “immodest” are not respectable) and the fact that these abusers have been targeting a particular set of vulnerable young working-class girls is at least somewhat naïve.

Such views of women are for sure not the only important reason why these gangs exist, but it must be a contributory factor to explaining their operation.

There are also Pakistani and Muslim girls who have been abused — something the Sun et al want to ignore — and we might also consider whether they might be less likely to report it for reasons to do with “honour” and “respectability”.

Socialists must defend oppressed communities, but also the oppressed within them.