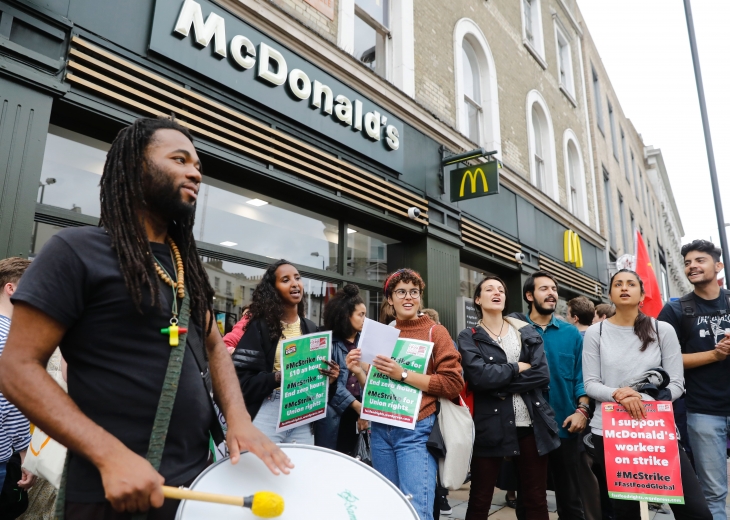 On the same day that McDonald’s workers in Crayford and Cambridge made history by going on strike, demonstrating the power of workers getting together and organising, it was an honor to propose to my CLP, in Tamworth, that it send a contemporary resolution to conference supporting the strike (see below). It also talks about other workers’ struggles, commits Labour to actively support them and demands the repeal of all Britain’s anti-union laws – not just the Trade Union Act – and a strong legal charter of workers’ rights. Lots of members present spoke about the difference being in a union made for them.

My motion was narrowly passed in a run-off between it and another proposal to send to conference, after which the meeting voted for it unanimously.

The Labour Party should stand by workers in workplaces, in communities, on the streets and on picket lines, and as a government it should make it easier for them to be on the picket line when necessary!

• For a more recent version of the motion you can submit to your CLP, see here.

Conference notes that on 18 August the Bakers, Food and Allied Workers’ Union announced that 4 September will see the first ever McDonald’s strike in Britain, in Cambridge and Crayford – demanding £10ph, guaranteed secure hours and union recognition. This is potentially hugely significant.

We note the ongoing, year-long struggle by Picturehouse cinema workers (part of Cineworld) to win the Living Wage, decent maternity and sick pay, and union recognition.

We note the recent victories against outsourcing and casualisation won by cleaners at LSE and SOAS.

Labour wholeheartedly supports these and other workers’ struggles. Our manifesto rightly said: “the most effective way to maintain good rights at work is collectively through a union”. Strong unions, freed from legal shackles and bolstered by positive legal rights, will be key to tackling poverty, insecurity and inequality, transforming society and creating an economy that works for the many, not the few.

For unions to be effective, workers need an effective right to strike. We note that conference 2015 voted unanimously to “legislate for strong rights to unionise, win recognition and collective bargaining, strike, picket and take solidarity action”.

• Support workers standing up for their rights.
• Integrate campaigns for policies like £10ph and scrapping zero hours contracts with supporting strikes and workers’ struggles.
• Scrap all anti-union laws and introduce a strong legal charter of workers’ rights – to unionise; win recognition and collective bargaining; strike, for purposes of workers’ own choosing including in solidarity with other workers and for political goals; and picket freely.