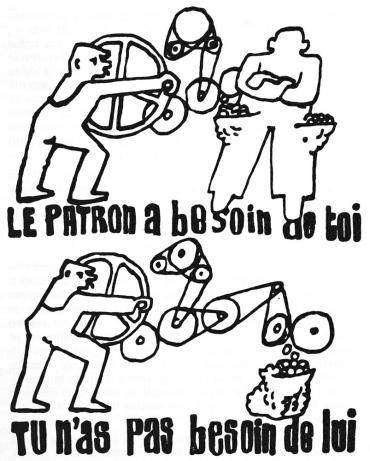 The language of class is returning to political life in Britain – but what is class? We need to unpick the issues.

The 2017 general election was dominated by the question of which party had the best offer for working-class voters. Some of the new crop of Labour MPs have talked explicitly about class, with Laura Pidcock and Hugh Gaffney, for example, both stating that they see their position as a means by which to represent working-class interests.

But there is a great deal of confusion over what class actually is. A lot of the language used — terms like “the 99%”, “the Establishment”, “the white working class” and so on — tends to muddy the water rather than help us to define things more clearly.

Why is it important for us, as Labour activists, to get to grips with the question of class? The obvious answer is that Labour is on some level a “working-class” party, formed out of the organised workers’ movement in order to provide a force to carry through its interests in the political arena.

The bigger reason to understand class is simply because we want to change the world, and in order to do so we need to understand both how society is structured now and what the most effective agents are to carry out the changes we want to see.

Most of the common language around class treats it as an identity. An individual is “from a working-class background” or “part of the elite”. Someone “is middle-class” because they went to university or go to the theatre.

This language reduces class to fixed, almost unchanging, categories into which individuals must be sorted. It actually suits our opponents because it obscures the real, complex and living nature of class relationships and reduces them to two dimensional caricatures.

Unfortunately, this view of class has been internalised by many people on the left. This is only natural to some extent — understanding the world requires some degree of categorisation and simplification, and language helps us to do that. Which of us hasn’t been guilty of referring to someone or something in the movement as “middle-class”without really unpacking what that means?

Class, in reality, isn’t about categories or “things” but about the relationships between those things. The Marxist writer Ellen Meiskins Wood referred to this as a “relational” view of class as opposed to the more common “geographical” approach. In the latter, where class is reduced to fixed categories,static political views are easily ascribed to groups of people.

Thus we are told that “the white working class” is uniformly concerned about immigration (or out-and-out xenophobic) as if this is a self-evident and unchanging truth. Again, it’s not hard to see how this sort of thinking helps our political enemies.

In the relational view, class describes not an individual’s or group’s identity but their relationships with society around them. To oversimplify a bit, this means that those who must earn a living by selling their labour power to someone else constitute a working class, while those who live off such labour by others, and who own the means by which goods and services are produced, are the capitalist class.

“Hang on,” runs a common refrain at this point. “This was all very well when everyone worked in big factories and mines, but aren’t things a bit more complicated these days?”

Leaving aside the fact that, globally, more people work in manufacturing and heavy industry than ever, it’s actually the case, even in Western economies, that class relations are much simpler than they used to be. Up until the 19th century, an individual or family unit was much more likely to be involved in a multitude of class relationships: perhaps being partly selfsufficient, partly paying a landlord in goods in a sort of feudal relationship, and occasionally engaging in some wage labour.These days, the latter form of work is almost totally dominant (along with unpaid work). Yes, there has been a shift from manufacturing to services. But ask a Deliveroo driver whether the wage relationship is any less real or exploitative as a result.

What are the practical implications of this discussion for socialists? Firstly it helps us to see where and how we can most effectively throw a spanner in the works of capitalism – the withdrawal of labour is an incredibly powerful tool in a society dominated almost entirely by the wage relationship. Secondly, it helps us to identify who we are trying to include in our political alliance: as wide a layer of wage earners as possible, regardless of background, nationality, race or gender.

It is wage earners, who run and understand our industries but are currently robbed of the profits of our work by the idle rich, who have the potential to collectively order society in a different way.

Finally, and this is particularly relevant in Labour Party circles, it helps us to identify the class interests for which we must fight. After all, how can you support the interests of the Picturehouse or McDonalds worker without on some level opposing those of the CEOs and executives?

There is no community of interest, or“national interest”, between fundamentally opposed classes who are on opposite ends of the wage relationship.