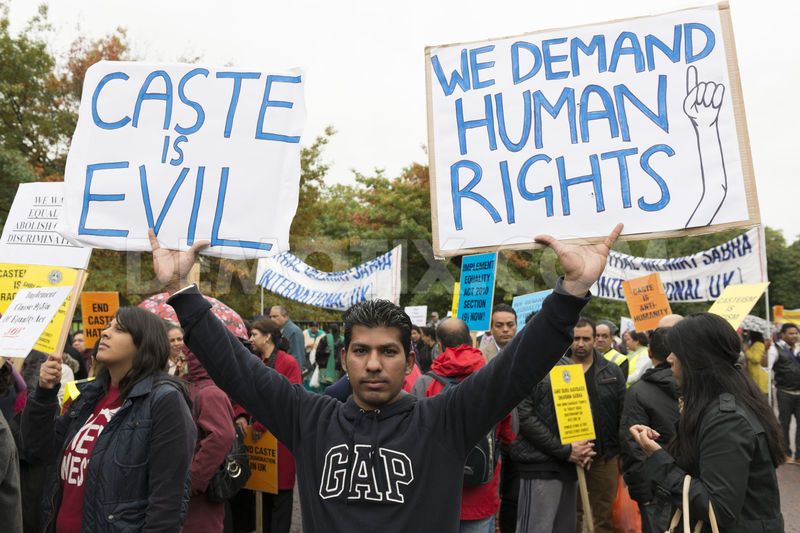 The Tories have announced a Consultation on whether Caste discrimination should be retained in the Equalities legislation as a category. They have backtracked from their duty to implement an amendment made by the last Labour government to the Equality Act 2010, which included Caste as a category under the overarching category of Race. The Consultation is in the form of a questionnaire that can be completed by anyone and ends on 18 September 2017.

Centuries old caste discrimination and exclusion found in the South Asian subcontinent is alive and well in the UK, amongst South Asian communities but particularly amongst Hindus and Sikhs according to many Dalit (oppressed caste) organisations which campaigned hard to have Caste included in the Equality Act 2010. The Tories who came to power soon after, failed to implement the Caste legislation despite a duty conferred upon them to implement.

In fact they have gone further in the opposite direction. The Tory Consultation while accepting that caste discrimination and exclusion exists in the UK, at the very outset skews its purpose by giving importance to the spurious arguments of those who wish to have Caste removed from the legislation. The Consultation asks whether Caste as a category should be retained at all, or whether it would be better to progress the grievances of victims of caste discrimination through ‘case law’ developments dealing with these grievances under the category of ethnicity! This move is clearly a first step towards removing Caste as a category from the Equality Act 2010. The arguments used are that retaining caste in the Equality legislation will ‘stereotype’ or target specific communities who have a  ‘natural affinity to caste’, or prove to be divisive. Similar arguments were used for other categories in the Equality legislation when they were introduced.

Bob Blackman, Tory MP for Harrow East is the lead parliamentarian campaigning against Caste being retained in the Equality legislation. The opposition to caste legislation has arisen from strong lobbies by a powerful bloc of upper caste, upper class South Asians which is staunchly Tory and which has entrenched links to the ‘Hindutva’ (Hindu Supremacist) movement in India. Bob Blackman is the main spokesman for these Hindutva forces in the UK along with Secretary of State for International Development Priti Patel. Patel is openly associated with the Hindu Swayamsevak Sangh (HSS), which is the UK branch of the Rashtriya Swayamsevak Sangh (RSS), an avowedly fascist organisation modelled on the blackshirts of Mussolini and which groomed and nurtured the current Prime Minster of India, Narendra Modi and who are behind the current wave of mob lynchings and rapes of Muslims, Dalits and Christians in India.

The Hindu Right has consistently campaigned for the Tories in several recent elections and this reached a high in the 2017 general election which explains the Tories’ support for the Hindu Right’s campaign to have the caste legislation removed from the statute book.

The claim that caste discrimination and exclusion can be dealt with on a case law basis even when the enabling legislation is removed from the Equality Act, is a fallacy. Caste was included in the Act, precisely because those who brought their grievances to the Courts and Tribunals were not successful without legislational backing. Caste Watch UK, the largest Dalit organisation in the UK has published numerous instances of caste discrimination, in the UK and the inability of the victims to access justice.

The Dalit organisations, human rights groups and progressive South Asian organistations have come together and developed a guide to answering the questionnaire as the Consultation’s equivocation between inclusion in the legislation and the ‘case law’ approach is extremely confusing. Labour and Momentum members must support the Dalit communities in the UK and support the efforts of progressive South Asian organisations.