“To choose Wembley Stadium, which is where the Champions League final takes place and where only rock stars perform, shows how special Narendra Modi is to all of us… MPs have just had a pay rise and because I am so excited about this event I will donate my pay rise for November for this great function.” –  Keith Vaz, 2015

Although I think The Clarion should avoid Swawkbox-style sensationalism, it’s hard not to feel a bit shouty about Keith Vaz, who has just been re-elected as BAME rep on Labour’s National Executive Committee, defeating Leeds postal worker, CWU rep and councillor Asghar Khan.

Vaz won because to vote being a black, Asian or minority ethnic member of the party is not enough. You have to join a separate organisation called BAME Labour which is little known and not widely advertised. You could even call it secretive. By the time of the cut off point to join and vote – ten months before the election – very few left activists, let alone ordinary party members, would have known it existed. 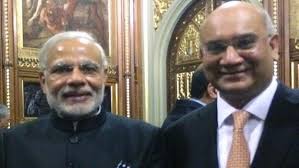 I can’t find the figures, but I would bet a lot of money the turnout was incredibly low. And so we are once again saddled with Keith Vaz – who, to get sensational, is a disgrace to the Labour Party.

I am not talking about the tabloid-driven “scandals” in which he has been embroiled – where essentially the left should defend him – but about his fawning before the rich and powerful and his opportunistic, self-interested record of backing various (and varied) reactionary political forces.

In 1989, shortly after becoming an MP, Vaz promised Salman Rushdie his support against Islamic bigots campaigning to ban his novel The Satanic Verses and against threats of violence. A few weeks later he was one of the main speakers at a march of Muslims in Leicester demanding the banning of the book, describing it as “one of the great days in the history of Islam and Great Britain”.

But Vaz’s opportunism and chameleon-like political character allow him to associate with anti-Muslim bigots too. In 2015 year he tried to make himself central to the feting of India’s far-right Hindu nationalist Prime Minister Narendra Modi when he visited Britain, ignoring Modi’s ultra-reactionary record, his regime’s attacks on democracy and the left in India, and his facilitation of harassment and even pogroms against Indian Muslims. The year before he lodged a formal complaint with the BBC saying that it’s coverage of Modi’s election victory was unfair!

Even by the standards of right-wing Labour MPs, this is utterly shameful.

Vaz is in no sense on the left, not even minimally. In addition to his pandering to Islamic and anti-Islamic bigots, he has distinguished himself by championing the interests of various super-rich capitalists to the point where it got him in trouble. He is a rich man himself, with many “business interests”.

It is no exaggeration to say that the labour movement must rid itself of the likes of Keith Vaz if it is to become a force for vaguely progressive change, let alone socialism.