By Sahaya James, University of the Arts Labour Students president

On Friday 28 July, Brixton Jamm was host to a well-attended grime night organised in support of the campaign for a living wage for all workers. The Living Rage event saw music, poetry and powerful left wing speeches combine as grime artists Blueprint Doggz, M3, K-Tellz, Minkles, Krucial Kidd, and other artists from Tha Minority and Broken Circle collectives performed, alongside speeches from workers fighting for the living wage at McDonalds and Picturehouse, myself on behalf of The Clarion, and other Labour Party members including Lewisham Young Labour activist Maisie Dowdeswell.

The event had a clear message: everyone deserves the living wage! The Labour Party’s support for the £10 hour living wage during the election galvanised thousands of workers and young people and is the sort of policy we should expect as a minimum from Labour going forward. If Labour is elected soon it will change the lives of millions of working-class people for the better. But the truth is that we shouldn’t wait for the hope of a Labour government, in the meanwhile struggling on with poverty pay. Instead of just relying on politicians in Westminster, the best way to make sure we have the living wage in our workplaces is to organise and win it for ourselves now.

We can win the campaigns at Picturehouse and McDonalds and we can win in your workplace too! And our success will make sure that the Labour Party sticks to its promises and implements the living wage for all workers. 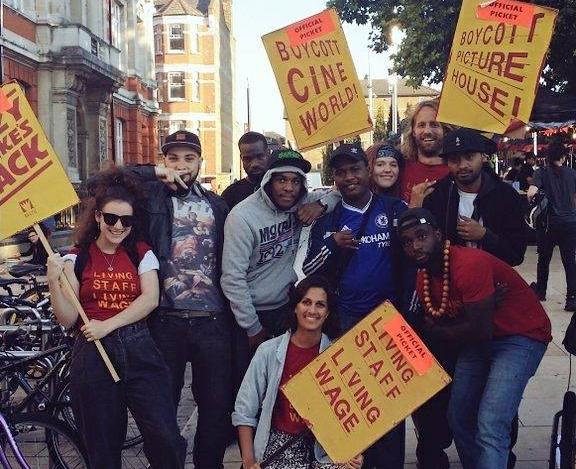 Artists who supported The Living Rage, on the picket line

This is not the first time grime artists have come out in support of workers and Labour. Labour’s campaign during snap general election saw artists like Stormzy and JME, along with many more of the biggest and most talented names in grime come out to support Corbyn and what is seen as the movement around him. This meeting point of culture and politics has signalled the start of exactly the kind of links between the arts and left-wing organising that are crucial in building the lasting and meaningful movement for socialism we need.

The event was co-organised by The Clarion and is exactly the type of event we plan to do more of going forward. Until the next one, show support for workers currently fighting for justice and against exploitation by joining the Picturehouse picket lines, and joining a union and starting a campaign for the living wage in your own workplace. You could also organise a Living Rage night of your own to raise the profile of these issues – get in touch for help: sjames416@gmail.com