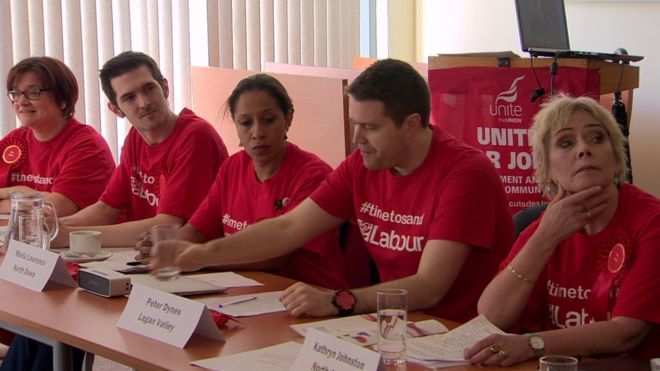 • For other material on the LPNI and Northern Irish politics, see our Ireland section here.

The Labour Party in Northern Ireland’s executive committee has recently undergone a catastrophic breakdown in communication, followed by a series of resignations which received a degree of local media attention and attention on the left. Sadly, the explanations given by those involved have been consistently misleading. Whilst the context is political, as might be expected, much of the upset is interpersonal and the motivations of those involved represent a complex combination of the two. As things stand, there is a toxic air about this local party’s dissent into in-fighting, but if we look carefully it might be possible to discern some lessons for the Labour left.

It is worth acknowledging the very difficult context Northern Ireland presents for Labour politics. Whilst the need for a non-sectarian socialist movement is clear, the political landscape is naturally shaped by sectarian strife and it is difficult for people to break out of age-old patterns of political allegiance. Of course, this is not helped by the fact that Labour does not have the right to stand candidates for elections in this region and is, therefore, a hamstrung party with limited ability to represent those who support its political agenda. The local party has been caught in a slow-moving tug of war with Labour HQ, dragging concessions out of them (like the ability to organise as a Constituency Labour Party) but little more. This limbo has created an environment in which it is difficult to campaign and win support and this has led to deep-seated frustrations among local activists.

On account of the marginal role Labour plays in Northern Irish politics, the composition of the local party differs from most other CLPs in the UK. As there has been an absence of Labour politics for many years, most of the key players have been involved in other left groups of one sort of another. Moreover, the membership is almost entirely composed of individuals inspired by Jeremy Corbyn’s leadership and the base grew very rapidly from 300 before the 2015 election to a height of 3000 in 2016. In a meeting to discuss the leadership challenge to Corbyn last year, over 70% supported Corbyn and abstentions outnumbered votes cast for Owen Smith. So, the current difficulties cannot really be explained by a Right versus Left dichotomy of the kind common in British CLPs. Instead, this appears to be the result of a much more petty factionalism that has thrived in what is, admittedly, a very challenging political environment.

This factionalism has been evident in General Meetings, which increasingly feature long and shouty monologues from men, personal attacks and serious allegations. This reached a pitch of acrimony over the issue of standing candidates in the 2016 Assembly elections. A split occurred between those who wished to stand under a banner (it is not possible to register as Labour, so this would necessarily have been some other formulation) and those who wanted to see through an ongoing National Executive Committee review into the local party’s right to stand. Unsurprisingly, the nasty atmosphere at meetings put off newer members participating and created an unvirtuous circle of shrinking meeting attendance and growing factional manoeuvring.

At the Annual General Meeting in March, dissatisfaction with an ‘old guard’ of executive committee officers led to a new committee being formed which represented a hybrid of old hands and newer, mainly left-wing, recruits from several social and political groupings. With large questions like Brexit on the horizon and the previous election strife just below the surface, this team struggled to answer much smaller matters and to get business done. In July allegations were made publicly about six officers – accusing them of racist and transphobic bullying of another officer, and a stalemate ensued. A month later, with no let-up in the hostility and no mediation between the warring factions, the resignations began. One group of six coordinated their resignations and gave a statement about what had gone wrong to the press. The statement about an ‘entryist’ plot was manifestly untrue and calculated to cause damage. In reality, it will likely damage the people who made it – who will appear to their left-wing membership as Blairite wreckers – but this move has also damaged the left.

In the murk of accusation and counter-accusation, it is difficult to see what really happened here. Was there bullying of individuals? It seems certain that there was, and accusations have been made on both sides. Have accusations of discrimination sometimes been weaponised to serve factional interests? It seems likely so. Whereas a proper process and mediation might have brought people together, public allegations of a serious nature have, instead, damaged reputations and rendered resolution impossible, for now at least. Unfortunately, egotism and the urge to cling to power have also played a prominent role here, to the serious detriment of socialist politics.

So are there any lessons we can learn from this rather nasty mess? We think so. This episode underlines that the Labour left will live or die by its ability to engage a broader membership inspired by the prospect of socialist politics. Without the scrutiny and challenge presented by new people, old political hands were able to double down on a tedious and unproductive dispute; egos got the better of some. Broad participation is also critical to healthy political argument. Here accusations of bullying have shut down discussion, marginalised others and stifled political debate – debate that is absolutely critical to our society at this time of change.

We have difficult questions to ask of ourselves on the left as we negotiate issues such as Brexit, post-colonial legacies, migration crises, neo-liberalism and the rest. We can only find answers if we are able to work together, learn from and educate one another, engage in open but courteous discussion and question those who currently lead. The worst of all worlds is a politically uncritical left that spends its time in internecine conflict. It was never going to be easy for Labour politics in Northern Ireland, but you’ve got to hope that the left can learn from this unfortunate episode.