• For how you can support the Picturehouse strike, see here.

Last year Theresa May spoke to the nation during her leadership speech: “You have a job but you don’t always have job security, you can just about manage but you worry about the cost of living”. She promised things would change. As the cost of living soars and wages continue to stagnate, the number of people struggling below the poverty line who are in work has hit almost four million, according to a study by the Joseph Rowntree Foundation.

The Ritzy cinema in Brixton is a trendy, ’boutique’ cinema, part of the Picturehouse brand. It plays to the sense of people who see themselves as anti-establishment. It speaks to the young and the oppressed. It brands itself as an arthouse cinema, attracting the intellectual and enlightened, yet it is owned by the hugely profitable corporate giant Cineworld. It is Rupert Murdoch in a Che t-shirt, selling copies of The Sun wrapped in the cover of The Ragged Trousered Philanthropists. 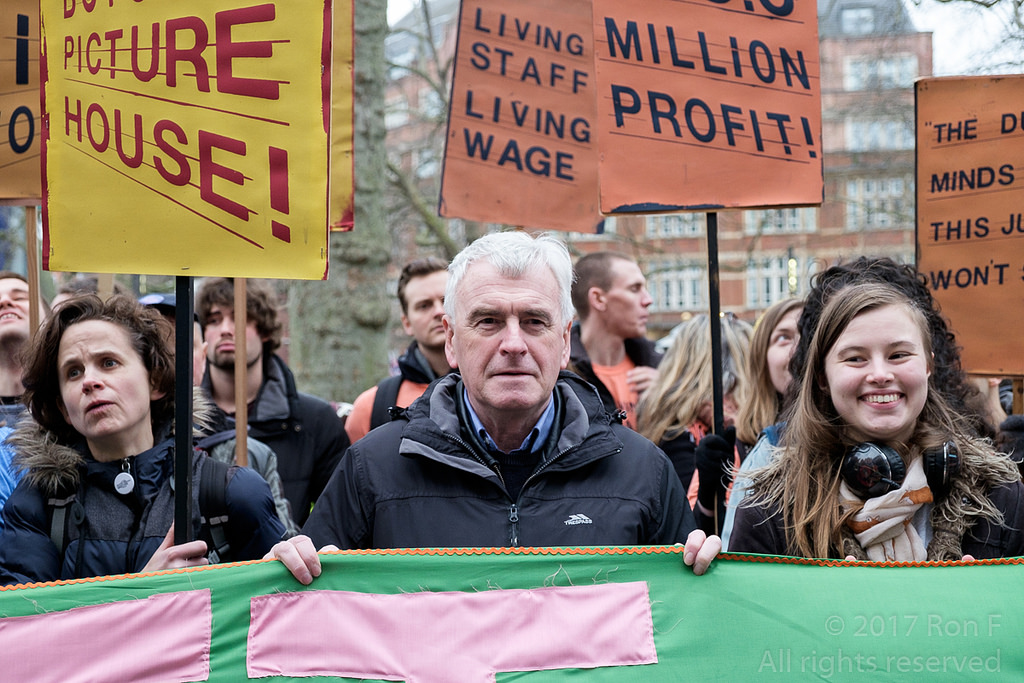 They’ve been in a long running battle with staff over paying a decent wage. A strike in 2014 won major concessions. This time it has spread to five other Picturehouses, four in London and one in Brighton, with more potentially on the way. The workers are demanding the full Living Wage, decent sick pay, maternity/paternity pay, union recognition (their union BECTU, part of Prospect, is only recognised at the Ritzy). They have been met with contempt, aggressive legal intimidation and now the sacking of four union representatives at the Ritzy. The demand to reinstate their reps is now part of the dispute. They are promoting a boycott of Picturehouse and Cineworld until the demands are met.

The dispute can be linked to the ‘Corbyn surge’ in a number of ways. The workers reflect the demographic most enthused by the new Labour Party. Many of them are Labour Party members and voted for Corbyn. Even more importantly, they are fighting for demands that were core to the Labour manifesto and election campaigning; for instance they have supported the demand for a £10 an hour minimum wage. John McDonnell and Owen Jones among others have recently joined the strikers on the picket line. We should encourage Jeremy Corbyn to do the same.

As the strike expands, however, the chain is expanding too. Recently the Chester press quoted Labour Council leader Samantha Dixon quoted saying that the Northgate Development, a huge vamp up of Chester City Centre, was pushing ahead full steam now that House of Fraser and Picturehouse were on board! The development is replacing the city library and will no doubt lay further ruin to the beleaguered Chester Market, once a vibrant hub, with building works planned to start in autumn.

The issue has been raised in Chester Momentum and should be on the agenda for our meeting on 15 August. The aim should be to push motions through the Labour Party and send a message to the council that we don’t want the city subjected to the intimidation and poor working conditions Picturehouse provides. They should not do the deal unless the strikers’ demands are met immediately. Labour and Momentum should organise protests around the project if necessary.

In Lewisham, Picturehouse is one of a number of companies bidding for the Playtower in Ladywell. Left-wing mayoral hopeful Paul Bell, backed by Lewisham Momentum, has put out a statement making the demand above, that the council makes it a condition that the strikers’ demands are met. Lewisham Momentum will also be discussing how to take this fight forward.

The national day of action on 29 July started to make the Picturehouse strike into a national issue. In Chester, Lewisham and everywhere Picturehouse and Cineworld raise their heads, Labour and Momentum activists need to engage their campaigning, letter writing skills and massive gobs. The companies have a fight on their hands!