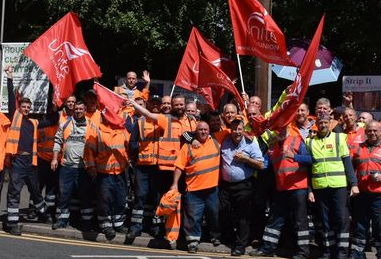 Refuse workers at Birmingham city council have been on a series of stoppages since June as the Labour council threatens 122 waste collection jobs – about 20pc of the entire refuse collection squad. The council is seeking to tear up longstanding agreements with the union covering staffing levels and working patterns.

The refuse workers, members of Unite, voted 90pc for strike action and 93pc for action short of a strike. They are on an overtime ban with workers adhering to their contracted hours (6am to 3.37pm), plus returning to depots for all lunch and tea breaks.

Thanks to South Birmingham Momentum for this excellent report.

For the past few weeks the refuse workers in Birmingham have been in dispute with Birmingham City Council over proposed changes to pay-grades, terms and conditions, and levels of public safety.

Workers from the Unite union are now beginning a third week of industrial action. I went down to Lifford Lane depot this morning to find out more about the dispute.

There were a large number of workers on the picket line this morning. I introduced myself, telling them that I was a Labour Party member, and that I wanted to find out more about the dispute, but through the workers themselves, and not just those who had the fortune of having their views published, often exclusively, by the local mainstream media. Immediately, one of the striking workers exclaimed, “Where’s the councillors? Why aren’t the councillors here to discuss this with us?” This was an issue that was raised time and again throughout the morning, and contributed to a genuinely angry atmosphere on the picket line. Workers were collectively angry that councillors did not seem to be engaging with them. Moreover, they felt like they were being ignored by the political class who distance themselves from the realities of real worker’s struggles and real working-class life.

Part of the dispute is about a pay and grade review, where previously agreed pay levels linked to skill grades are threatened by council proposals. One worker was disgusted with the language that has been used by councillors. “They call it ‘modernisation’ – we call it job cuts,” he said. “We’re out doing this job year on year, we’ve told the council how we need to modernise, how we need to improve efficiency. They ignore us, yet they have no experience of doing our jobs.” Some workers spoke of the inefficiency of the council’s long-standing policy of relying on agency staff – some who have been doing the job for over a decade – rather than take the workers on permanent contracts. “Hardly modern, is it? But they do not listen,” grumbled another disgruntled worker.

Workers complained at the attitude of the council. “They won’t come to the table,” they said. “They have their view of ‘modernisation’, and that’s it.” Another angry worker told me that the proposed changes will mean the scrapping or downgrading of the grade 3 post. This is a safety-critical post. It concerns the very workers who are trained and skilled to drive the vehicles. One only has to think of the size of the wagons that are used in the huge operation of moving Birmingham’s rubbish to imagine the carnage that could occur if cuts to safety are allowed.

And what for the future? If the council can alter conditions and get rid of previously agreed terms then what is stopping them doing it again in the future? Could councillors simply abolish grades, after, in the words of Unite regional officer, Lynne Shakespeare, “woefully inadequate consultation”?

Council attempts to redefine the job are another slap in the face for the workers. They stressed that the job hasn’t changed at all – people still need to have their rubbish collected – but the conditions have. Expectations of time had been put on workers, especially since the introduction of wheelie-bins, but the council had shown arrogant disregard with a one-size-fits-all policy. The view that there is no difference in removing refuse from a wheelie-bin from two completely different areas in two completely different houses is as ludicrous as it is ignorant. Add to this the policy of side-waste – waste that is left outside of the bins, that workers are not contracted to take, but bosses have instructed them to collect – then the time constraints become even clearer. Furthermore there are special requests from residents, for example, some elderly residents who cannot physically move their wheelie-bin on to the pavement, so leave it at the top of their drive. Both the council and the workers want to get this waste collected, but it is seemingly only the workers who recognise that this takes more time.

The points made by the workers were plentiful and detailed. Previous projects that had wasted many times more than the predicted savings were to make, ignoring the cost-saving advice of the unions and not listening to the solutions offered by the workers, the false offer of equivalent employment, the privatisation of the vehicle mechanics and maintenance, the lack of assessment on a variety of health and safety issues and the failure to correctly survey properties were just a sample of the points that were made.

The workers were clear:

• These proposals will not improve the service, they will make it worse.

• If the workers don’t stand up for their jobs now, the council will move to make even deeper cuts in the future.

• People never noticed the refuse workers… until they weren’t there.

South Birmingham Momentum sends its true solidarity to the Birmingham refuse workers and supports their action 100%. We don’t want a city with a fourth-rate, underfunded refuse collection service. We don’t want the safety of all of us to be jeopardised in the name of austerity. We don’t want the council to attack Birmingham’s most valuable assets – those workers who I met today. If we want to reduce pay, perhaps we should start at the top, those in senior council positions with fat-cat salaries that are in excess of ten-times the amount of some of the workers I spoke to today.

We do want to show our solidarity with the refuse workers. We can do this by attending the picket lines every day until we win this dispute. Workers will be on strike outside Lifford Lane depot every weekday morning between 6am and 8am and every weekday afternoon between 12.30pm and 1.30pm.

Members of the Labour Party can further show solidarity by passing resolutions at ward and constituency level that support the industrial action of the refuge workers and oppose the council proposals that amount to nothing more than an assault on the working-class of this great city, and a guarantee of a worse service.