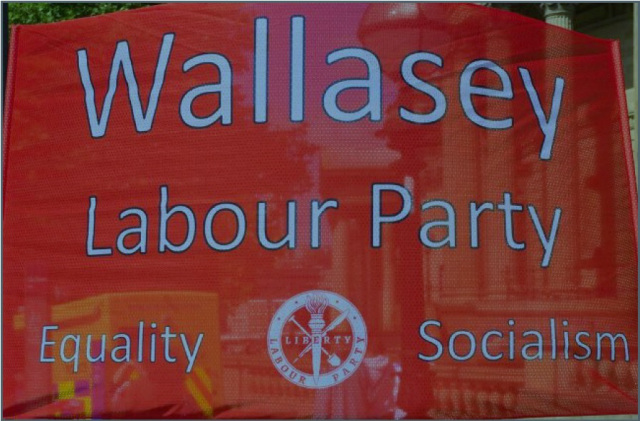 Wallasey CLP, on the Wirral, has hit the headlines repeatedly. It was suspended by the Labour Party machine following a left victory at its last AGM. Here a Wallasey CLP activist gives their view on the story so far.

Over 12 months after the failed anti-Corbyn coup by the right of the Parliamentary Labour Party, Wallasey CLP on Merseyside is still not reinstated. The 2016 CLP AGM met the day after the EU referendum. It elected a number of Corbyn supporters to key posts. The coup had just started. The meeting instructed the incoming officers to write to the MP, Angela Eagle, asking her to continue to support Jeremy.

Within days Angela had challenged Jeremy. Wallasey CLP’s support for Jeremy was an embarrassment, so an entirely false series of allegations was made. Tessa Jowell alleged on TV that Angela had “faced homophobia” at the AGM, despite Angela not actually being there. Local right wingers went to the media alleging that an offensive homophobic term had been used to describe the MP at the meeting. The CLP was suspended to ensure that it could not have a nominating meeting, which may well have nominated Jeremy.

Angela’s campaign quickly collapsed. After a disastrous launch, and a round of poor TV interviews, the Labour right switched their backing to Owen Smith, whose campaign then also fell flat.

But the CLP remained suspended. Over the subsequent months all the allegations melted away. No-one was ever formally charged with any inappropriate behaviour at the AGM.

Over a year has passed and the Party is only now being allowed to emerge from suspension. Regional Office is organising Branch AGMs in September, and presumably a CLP AGM after that.

The CLP Vice Chair Paul Davies is suspended, with no date for a hearing. He has never been accused of homophobia or misconduct at the AGM. His apparent crime is being prominent in defending the CLP against the allegations.

The whole sorry saga shows how much is still to be done to democratise Labour. The Compliance Unit and the Disciplinary structure operate without fair procedures, without natural justice, and with little or no democratic control. Some of the left on the NEC have really tried to defend local Parties and activists, but others have been absent or silent.

The left on the NEC should stand by its local activists. An open, fair, speedy and democratic process should be put in place to consider CLP suspensions and individual suspensions and expulsions, with an ultimate right of appeal to Party conference. Across the country members have been expelled for being the “wrong sort of socialist” whilst people who are not socialists at all hold important positions and represent the Party. Momentum must stand squarely behind the victims of this purge, and not indulge in similar tactics itself within the left.

The pro Corbyn left in Wallasey has not been cowed by the accusations or the suspension of the CLP. Activists have campaigned against the Labour Council’s cuts in the “Wirral Needs” campaign. The Wirral Momentum group thrives, with monthly meetings of 40 to 80 people and a strong network across the borough. Local activists remain proud of the role we played in undermining the challenge to Jeremy Corbyn and helping secure his re-election as Labour leader. We feel vindicated by the General Election campaign and the positive response to the left wing manifesto. We will continue to campaign for a democratic Labour Party with radical socialist policies.