On 2 August the main headline on the front page of the Times read: “Labour MPs urge Corbyn to condemn Venezuela”! Labour MPs are using the crisis in Venezuela to have a fresh pop at Corbyn.

No doubt some Labour MPs are genuinely concerned about human rights abuses in Venezuela. But the campaign as a whole is both bad politically and deeply hypocritical.

I don’t say that because I am a fan of the Maduro government. I do not believe it is socialist – socialism or even a workers’ government can only be created by the self-organisation of the working class, not Bonapartist type populist regimes. Moreover in the recent period Maduro has taken an even more authoritarian turn, with many of the social gains made under the government of Hugo Chavez – also not socialist – in danger or already gone (see this statement by Venezuelan socialist organisation Marea Socialista for a useful explanation). We should be supporting Venezuela’s beleaguered but substantial labour movement and particularly the wing of it critical of Chavismo from the left – not the government. 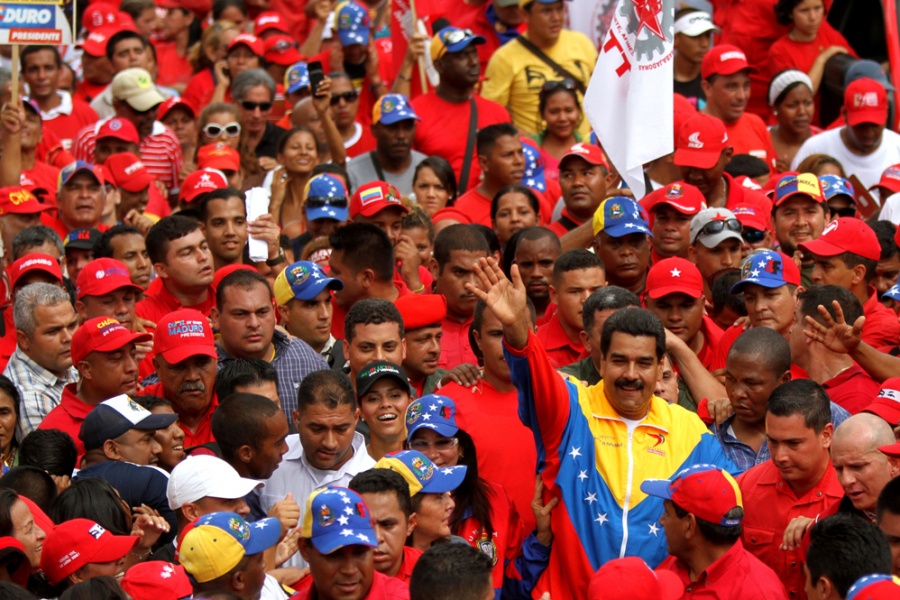 President Maduro on the Caracas May Day march

But despite this and despite human rights abuses which are almost certainly taking place and getting worse – and which we should not be afraid to criticise – the dominant forces of the Venezuelan opposition do not represent a better alternative. Despite undoubtedly having some popular support, they are a right-wing, anti-democratic movement which is using popular dissatisfaction and supposed concern for democracy as a cover for its real agenda. They collaborate with a US government that has long sought to overthrow the “Bolivarian” regime for old-fashioned capitalist and imperialist reasons.

The current movement is the descendent, so to speak, of the right-wing coup against Chavez in 2002, which was defeated by mass popular mobilisation. The cause of democracy and the working class will be set back if it succeeds.

We can also question to what extent many Labour MPs are motivated by genuine concern for democracy and human rights. They seem determined to ignore the fact that the Labour Party leadership has issued statements criticising the Venezuelan government (through shadow foreign office ministers Emily Thornberry and Liz McInnes, admittedly, not Corbyn – but Corbyn’s spokesperson has endorsed them). Is their problem that it is insufficiently enthusiastic about the right-wing Venezuelan opposition, or do they just not care about the facts at all?

And in addition to the Labour right’s silence about the nature of the Venezuelan opposition, the right-wing MPs’ broader record speaks for itself.

Many of those leading the charge against Corbyn on Venezuela broke the whip and abstained when the Labour Party pushed to end British support for the disgusting Saudi war in Yemen – something I am still genuinely slightly astonished by. Angela Smith, the All Party Parliamentary Group on Venezuela member quoted widely in the press today, is a case in point. (She also abstained on the Welfare Bill, in case you were wondering.) Such people support “democracy” as long it serves the interests of British capitalism and the Western powers. Labour MPs supporting Narendra Modi when he came to the UK was another shocking example.

Perhaps Corbyn could do more to use his influence to stop human rights abuses by the Venezuelan government. I’m sure, judging by his previous statements, that he has illusions in Venezuela along with other “progressive”, “anti-imperialist” developing world regimes. That’s something The Clarion might look at in the near future. But this campaign to condemn him over Venezuela is fairly absurd and in many ways disgraceful.