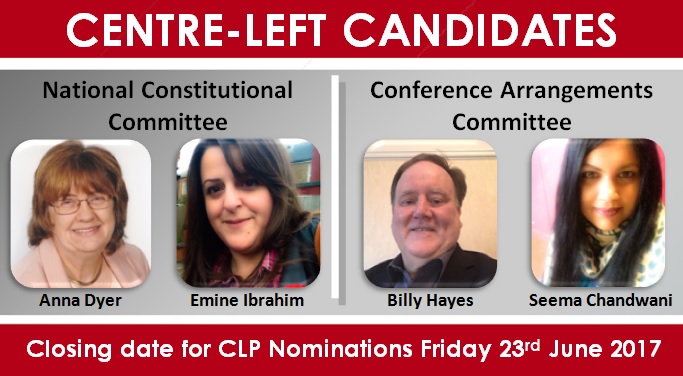 The left has triumped in the CLP nominations for Labour’s Conference Arrangements Committee and National Constitutional Committee.

See the CLP Nominations Twitter account here. On 3 July, according to Labour left activist Michael Calderbank: “The left wing slate for important positions in the Labour Party’s internal structures now has 231 nominations from constituency parties (CLPs), compared to just 62 for the Progress/Labour First candidates”. Nominations between 3 and 7 July seem to have strengthened the left further.

The CAC decides how conference is run, including whether motions and rule changes are ruled out of order or not. It can have a major influence in whether the conference is allowed to function as a meaningfully democratic conference or not. The NCC decides how the party rule book is implemented and has some some way over expulsions and suspensions, both are extremely important.

There are issues with how left (at the moment: “centre left”) slates for LP national committees are chosen and what they represent, but that is for the (near) future.

Immediately we must build on these great results by:

Mobilising to make sure members vote for the left-wing slate for the Conference Arrangements Committee (the NCC is elected by conference itself);

Not assuming that these figures reflect the proportion of left-wing delegates at conference or that left-wing delegates alone will mean winning positive changes there. We need to do much, much better than last year! The left needs serious and urgent discussion and organisation about how we win democratic rule changes, left-wing motions and other victories.