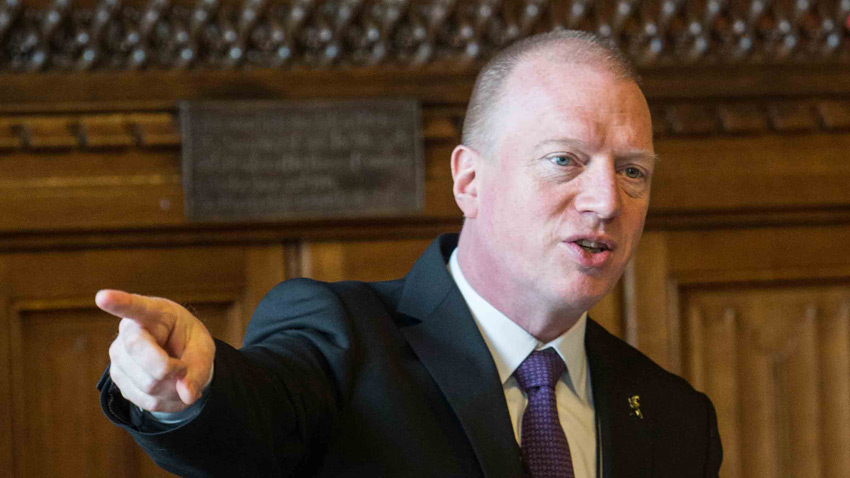 Fire Brigades Union General Secretary Matt Wrack spoke to The Clarion shortly before the General Election was called. We printed the first part of the interview in issue 6. In this second half, in issue 8, Matt talks about wider socialist ideas and perspectives for building up trade unionism.

You call yourself a socialist, pretty prominently, and am I right the FBU also has socialism in its aims?

We’ve got a preamble to our rule book that links the union’s role as organising people within a particular industry, to recognising that workers have to act independently, recognising that workers are part of an international class, and therefore the union is part of an international labour movement, with the ultimate aim of changing society, to bring about a socialist system.

The FBU was founded in 1918, I’m not sure when the socialist aim was adopted — it wasn’t right at the start — but the union has always had a left-wing tradition in one form or another.

What do you mean when you say you’re a socialist?

One thing the Corbyn movement has done is open some possibilities precisely to discuss that issue. John McDonnell has referred to socialism from the platform of Labour Party conference. Jeremy Corbyn has referred to “socialism for the 21st century”.

For me it means that we live in an exploitative society where the majority are exploited by a very tiny minority, the majority being the working class — I think there’s been a big retreat from even discussing what we mean by that. People think it’s about wearing flat caps or whatever. It’s actually about discussing people’s position in society, of not having ownership of the means of production, so that in order to live people have to go to work for other people. That’s the basis of exploitation, and that’s the basis of capitalist society.

Therefore, fundamentally, we have to set out an aim of changing that. Socialism therefore means you end production for private profit, and you find ways of producing for need, which at the same puts the majority really in control of society, so genuine democracy. That’s what socialism means to me.

There’s different levels to that.

First of all, we’re a smallish union, only about 35,000 – we’ve lost about ten thousand. We have high levels of density, so when there are job cuts we lose a lot of members. Things are pretty bleak on that front. But as a trade union we’re there to represent everyone. We’ve changed our rules on that. We aim to be, if you like, an industrial union that represents everyone in that sector of public services as well as the wider fire industry.

Not everyone has to agree with all the political demands and policies of the union to be in it; our aim is to fight for their pay and conditions.

Equally, we have got a very good tradition – going back to the union’s founding – of being on the left. We have politics at the heart of our union education. Other unions seem to a lot of skills training, which we also do, but we also do political education, which isn’t just training. Getting people to try to think for themselves, read, and discuss and so on.

A lot of our activists will see themselves in some way as socialists, and it’s always been part of our national education to link up the trade union struggle with the political struggle, with those ultimate aims. As long as you live in a capitalist society, you can win individual battles or lose individual battles, but there’ll always be another battle, because that’s the way the system works.

So yes, there’s quite a layer of our activists who identify that way, but interestingly for a long time a lot of them haven’t been politically organised because of the state of the Labour Party — and the left.

When I joined the fire services in the 1980s, there were organised groups, people in the Labour Party but also other left organisations. In the past twenty years, most of that’s gone. A lot have joined Labour since 2015, including a layer of local officials who even a few years ago would not have dreamed of it, despite seeing themselves as being on the left and active in local activism beyond the FBU. You know we’ve had a lot of battles with Labour employers, so there’s been quite an element of either hostility to Labour politicians at local and national level for quite a long time. But the Corbyn thing has changed that a bit and a layer of people have begun to get involved.

We try to raise political issues with our members. In the aftermath of the 2007-8 crisis, we did stuff around the banks — we published a pamphlet calling for public ownership of the banks, and we raised it at the TUC. We’ve had no criticism from our members for raising issues like that. We did a similar thing on the energy companies, calling for those companies to be nationalised, and again it was not controversial in the union.

Apart from anything else, we’re a union in public services, and a whole series of decisions that affect us are made by politicians and as a result of politics, and a lot of our members get that.

What’s the state of unions and workers’ organisation? What can we do to strengthen it?

I’ve made this point a lot, that we have to face up to how difficult the situation is. The trade union movement has been cut in half since 1979 size wise and in terms of density, the proportion of workforce in unions has been cut massively; so has the number of people covered by collective bargaining. That’s just the headline figures, and then you get to the actual question of the state of workplace organisation. It’s hard for people to face up to.

You become aware of sectors where people might be union members but they have no union reps and no union organisation. You take the campaign against the Trade Union Bill, and compare it with 1971, when we took on the Industrial Relations Act. That 1971 movement was only possible because we had networks of shop stewards on the ground that could act and lead people in a serious campaign to defeat it — to be frank, we don’t have those networks now. Largely because industry has been wrecked, traditional industries, but we haven’t recovered from that and found new ways to operate in a different economy. It’s a different world.

We’ve had some discussion in the union recently about recruitment — when I was at school, everyone’s mum and dad was in a union, union figures were on the telly all the time, what the general secretary of the T&G said was very important. That’s all changed, and so consciousness of unions has shifted. But the need hasn’t changed: being in a union and being able to operate collectively in your workplace transforms people’s experience of work.

In our union people see they’ve got to look after themselves and their families and so on, but they also see things very collectively. If we’re going to make progress, it’s going to have be through the union, whether that’s on jobs, or pay, on protecting conditions or whatever. When you reach an agreement, it’s a way that your management can’t simply act arbitrarily but has to comply to some extent.

There’s lots of people in work today who aren’t used to operating in the way: you just turn up to work and do what you’re told. You don’t know the rules because probably there aren’t any rules really. It’s very different from the world firefighters are operating in, compared with some of the younger people working in the private sector, in service industries and so on.

We have to find new ways of operating – and there are people pioneering this, the cleaners’ campaigns, the Picturehouse strikers and so on. People built unions in the past in probably even more difficult circumstances than they’re being built in today, so it’s not that it’s impossible.

Momentum has workshops on all sorts of things but not on organising in the workplace. Jeremy Corbyn and John McDonnell have a long tradition of supporting trade unions in struggles and strikes; they support getting rid of the Trade Union Act and introducing new rights for people at work. But that can’t just be delivered from on high, from people in Parliament, that’s got to be fought for on the ground in workplaces. If this movement is to be built, it can’t just be electing some MPs and councillors, it has to be around getting people organised again.

What do you think the most significant or potentially significant workers’ struggle are at the moment?

One challenge the unions have is around pay. Living standards have stagnated; they’re still below what they were in 2007-8 and it’s projected that will continue until 2021 or so. The government’s getting away with seven years of pay restraint in the public sector so far and it’s looking like they’ll carry that on till 2020. It’s a real challenge for the trade union movement. The last two years at the TUC, PCS and ourselves put in a motion calling for a strategy on that, which in reality hasn’t been implemented.

The struggles I’ve mentioned – the Picturehouse workers, the cleaners – those are little shoots of potential optimism. We should get behind and support these attempts to organise in pretty deregulated parts of the economy. It could sound a bit pie in the sky on one level, but if we can make breakthroughs there, history shows it could inspire people in whole sectors to look at it and say, we’re going to do the same thing. That’s the optimism there – involving young workers, involving migrant workers and so on.

In Britain and a lot of countries, there is a rise in nationalism, anti-migrant politics and so on. Could you comment on that and how we fight it?

One thing we have to wake up to is that all populist movements aren’t necessarily on our side. They can be reactionary as well. Clearly, in my view, the 2007-8 banking crisis was a crisis of capitalism. We should say it’s the fault of capitalism. But one response to that has been right-wing populism and retreat into nationalism including the blaming of migrants. Clearly we have to fight that.

The other side is where are the advanced countries going? Is this a new period of economic nationalism, ending the whole period of liberalisation of trade and so on. Trump seems to be setting out a very clear economic nationalist agenda that’s about protectionism. What protectionism tends to do is bring about protectionism elsewhere. You saw that a lot in the 20s and 30s. I’m not saying we’re repeating the 20s and 30s, but we’re possibly facing a very different international regime from the one we’ve faced for the last thirty years, and it might present very different challenges.

There are economic nationalists on the left as well, people who think that you can solve the problems working people face in Britain alone. These are not right-wing populists, but they are wrong. I think these kind of views are fanciful and backward; it was wrong thirty five years ago and it’s even more wrong today with a more integrated world economy. These are big things people aren’t discussing enough.

• See also: ‘Why we must fight to nationalise the banks’, by Matt Wrack