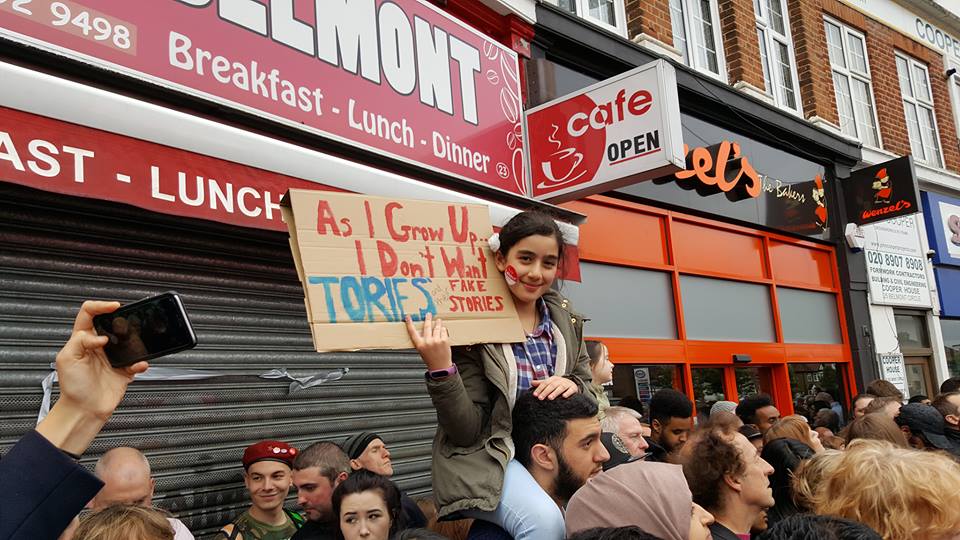 Harrow West: from marginal to landslide
By Rosie Woods

Harrow West was Tory until 1997 when it became a Labour marginal. Demographic changes helped Gareth Thomas retain the seat but never with a massive majority.

On 8 June Labour gained 60% of the vote, majority 13,000. Yet in the weeks up to the election we were told repeatedly it was on a knife edge. How did they get it so wrong?

Harrow West, like many Labour marginals, ran a wholly defensive campaign. Gareth Thomas barely referenced Labour or the manifesto – even the most popular bits — in his literature. The campaign consisted of session after session of door knocking.That is a necessary part of any campaign, but this canvassing was purely voter ID. Canvassers were instructed not to try to persuade people.

For those of us who were campaigning outside schools over education cuts, or running stalls and speaking to people out and about, it never felt close. Doing voter registration at a local college, everyone who could vote was voting Labour and already registered. Out canvassing we found first time voters were raising their fists in the air and cheering. “I’m voting for Corbyn”, they said – proud of the fact they were voting for the first time. There were real signs that since the manifesto launch and the vibrant Labour national campaign something had shifted. But in Harrow the official campaign refused to adapt, even as the polls changed. Corbyn is toxic, young people don’t vote — this was repeated like a mantra.

Meanwhile Harrow East received virtually no resources at all. Not one Labour party staffer, while Harrow West had ten! This was also a marginal, but a Tory one. The received wisdom was that it was unwinnable. Nonsense: with a negligible though hard-fought campaign, the majority was cut dramatically. Locally even the most hardened right wingers have had to concede they got it wrong. But while they say this, they continue to organise against the left.

The existing machine isn’t just resistant to outward-looking campaigning — they have forgotten how. We need to go around them. We should fight every election as if we think we will win — campaign for Labour in every seat.

Sheffield: red all over
By Caroline Henry

Sheffield Hallam was one of the big shocks of the General Election, with Labour taking the seat from Nick Clegg and turning it red for the first time in its history.

This victory means that all the Sheffield constituencies now have Labour MPs, but has also demonstrated the importance of the surge of members into the Party.

Prior to 1997 Sheffield Hallam was a Tory seat. It was taken by the Lib Dems with considerable tactical voting by some Labour supporters. The local Labour Party had focused more on council elections and largely helped out in other seats during General Election campaigns, as the Lib Dem majority looked unassailable.

Things began to change in the run up to 2015 with a serious campaign, with Oliver Coppard as the candidate, to unseat the by then unpopular Nick Clegg. This campaign made serious inroads into Clegg’s majority, narrowing it to just over 2500, but also began to draw new members into activity. The first CLP meeting after the 2015 election was large, and the first indication that the membership was beginning to grow. Corbyn’s leadership campaign attracted many more new members across the constituency, but it wasn’t until the General Election campaign really got going that large numbers of members and supporters got involved.

Hallam should have been a target seat based on the 2015 result but, due to a more defensive strategy by sections of the Party, was not prioritised for campaigning and resources. At a large meeting of the CLP, just after the election was called, some local members argued strongly for a serious campaign on the ground in Hallam. Jared O’Mara, a Corbyn supporter with a long track record as a disability campaigner and Labour Party activist, was only selected a matter of weeks before the election.

Jared and many hundreds of Labour Party members and supporters took to the streets, canvassing and campaigning, using street stalls and targeted leaflets. On many occasions there were over 40 people turning up to canvass. Many were newer members or members recently drawn into activity. One very successful initiative involved producing leaflets on the cuts in local schools, each tailored to a particular area, which were then handed out outside the school gates. The response from parents /carers was extremely positive, with people clearly opposed to the cuts in education.

The vibrant, visible campaign was a hugely positive experience for all those involved and drew many into campaigning. Labour Party members and supporters from other Sheffield constituencies came over to help. Momentum locally encouraged supporters to spend time campaigning in Hallam, and Momentum nationally sent out numerous calls and texts to get people over to Hallam in the closing stages of the campaign. Persuading Labour supporters who had previously been convinced by the Lib Dems that they needed to vote tactically to keep the Tories out of the seat was an important factor in the victory, but the buzz around the campaign also contributed in large part to the fantastic result for Jared and the Labour Party. There has been a further surge in CLP membership during and since the election campaign.

The challenge in the next election will be to mobilise even more people to ensure that Jared’s majority can be maintained if Tory voters decide to vote tactically for the Lib Dems (there was a switch from Clegg back to the Tory in June), and to ensure that Hallam CLP can involve the hundreds of new members into regular campaigning activity. 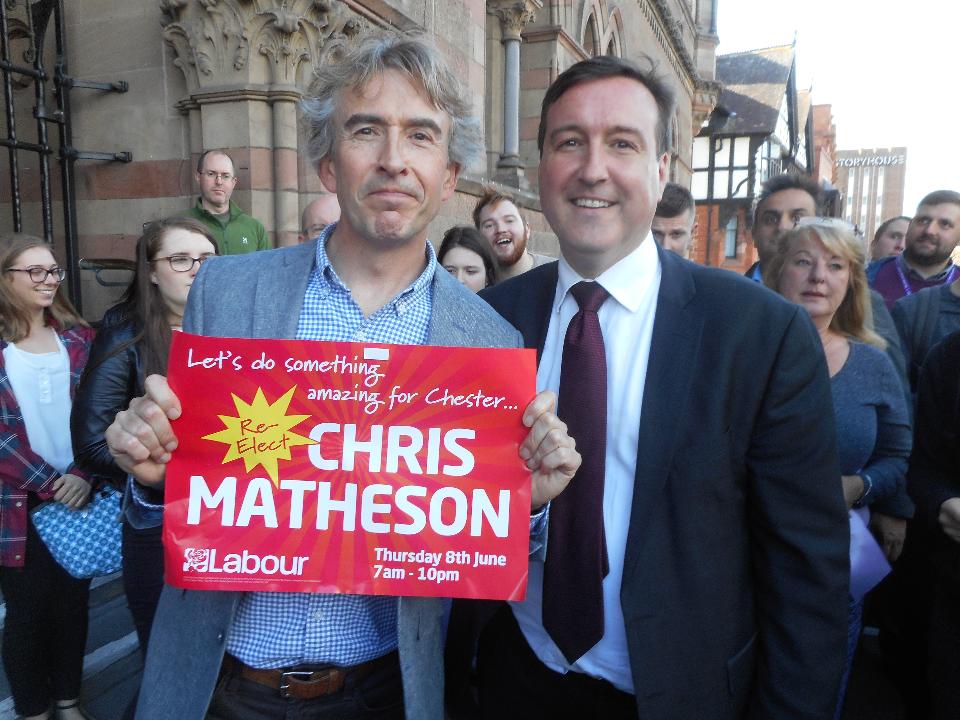 Corbyn is popular – even in leafy suburbs
By Helen Rutherford

Chester is a strange and wonderful place to live. It’s exceptionally affluent to the point of pretentiousness, filled with footballer’s wives, private schools, Range Rovers and leafy suburban family homes. When I moved here six years ago from Sunderland after studying politics I wondered “how on earth could I ever find like-minded socialists?”

When Momentum came along I really thrived. Through Corbyn’s re-election campaign I made friends and learned so much about activism. It really had a bit of a buzz going in Chester. After the re-election, upon trying to get on with local politics within the CLP, it became very clear that it was, deeply divided. An old guard of middle class, middle aged, councillors’ wives and cake bakers had the monopoly of power and they hated Corbyn with a passion. They knew who the “Momentum lot” were and we were stared at and glared at and hunted down, to be argued with at every chance. It was very isolating in my toxic branch meetings.

The insistence on the Momentum Steering group on not wanting to push or challenge the local party on key issues became evident.There was too much compromise for power and not enough sticking to principles. One much respected comrade was constantly lambasted for his open criticism of the Corbyn bashing by the MP, even in Momentum, yet hypocritical councillors stand up in a temper and shout that they would “most certainly criticise Corbyn on the doorstep”.

Chester fought a decent campaign for the general election. They mobilised, they stood in the city in their gazebo, they published well-directed videos and they even had Steve Coogan alongside Chris Mattheson MP shouting on the steps of the town hall. But they rarely mentioned Corbyn in their campaigning. It was all Chris Chris Chris… the hard working MP of Chester. A fine argument and a true statement, but still, a world away from the core principles of the wonderful manifesto that helped Labour win back so many seats.

The most interesting aspect for me is whether these marginals can still cling to their notion that they are simply fighting for their MPs because Corbyn is toxic in the more affluent or marginal areas. It plays into the widespread lie that their politics are any different to Corbyn’s.

I’ve never actually disagreed with any member of my CLP on policy, simply on this grudge-bearing that continues to this day.

It’s worth noting that just before the election was called,when Corbyn was being slammed and May thought she actually had a chance to grab a higher majority, a by-election was held in Blacon in Chester and was won by Labour with a landslide.

The marginals underestimate their constituents. They don’t engage their new Corbyn inspired members enough and they pedal the lie that Corbyn is toxic. I’m not sure how they’ll save face now that Corbyn has proven himself.

Only time will tell but I refuse to accept that the only way to win marginals is to pretend to be something that we aren’t. We should be proud socialists.

Let us know what you think? Write a reply? Or send us another report? theclarionmag@gmail.com