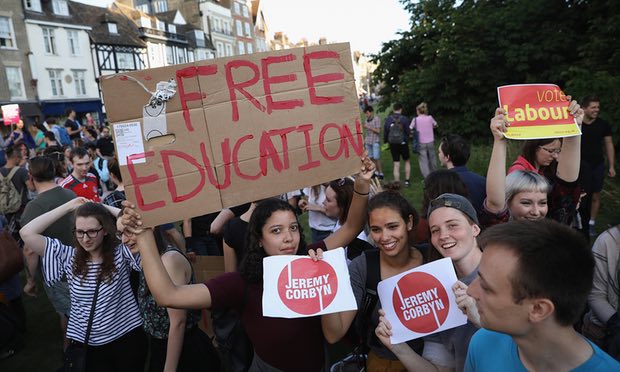 We are a group of students and young people active in the Labour Party who want to mobilise people to campaign for a Labour victory, based on Labour’s policies and our ideas for free, democratic and lifelong education.

Right now the Tory government’s higher education reforms want to raise fees and turn universities into businesses; massive funding cuts, course closures and job losses are decimating Further Education, while our schools are also facing devastating cuts; and workers on campus are increasingly being outsourced, casualised and made redundant. Labour’s plans for a National Education Service, free, funded by corporation tax and available from cradle to grave, begin to outline a radically different vision for education, and we have a big opportunity to agitate for these ideas and influence them.

Students and young people should join Labour, get active in their local parties, constituency Young Labour groups and campus Labour Clubs (or set them up where they don’t exist) and campaign for a Labour victory and for free, democratic and liberatory education inside and outside the party.

STUDENTS FOR LABOUR FOR FREE EDUCATION – support the campaign

Please email or comment below to add your name to this statement (including any organisation you are part of/positions in the movement you hold) and/or get involved in the campaign: labour4education@gmail.com

Labour is way ahead in the polls among young people, and even further ahead among students. We want to build on that enthusiasm to mobilise people to register, vote and get active in their Labour clubs, Young Labour groups and CLPs to campaign for a Labour victory on 8th June; and to continue campaigning after the election.

A Labour victory would give us the best chance in a generation of winning a free, publicly funded and democratic education system, a national education service accessible from cradle to grave. We will campaign for Labour’s policies to:

However, we should also push for this vision to be bolder and more radical. Every school should be a democratic community school; all students should receive living grants, paid for by taxing the rich; and Labour should campaign to organise young workers in unions. We must also push for Labour to defend international students’ by taking a much stronger stand in favour of migrants’ rights and freedom of movement, and against the racist PREVENT strategy.
Whatever the outcome, after the election we’ll continue to fight on our campuses and in our Labour clubs, Young Labour groups and CLPs for a democratic, free, lifelong education system.