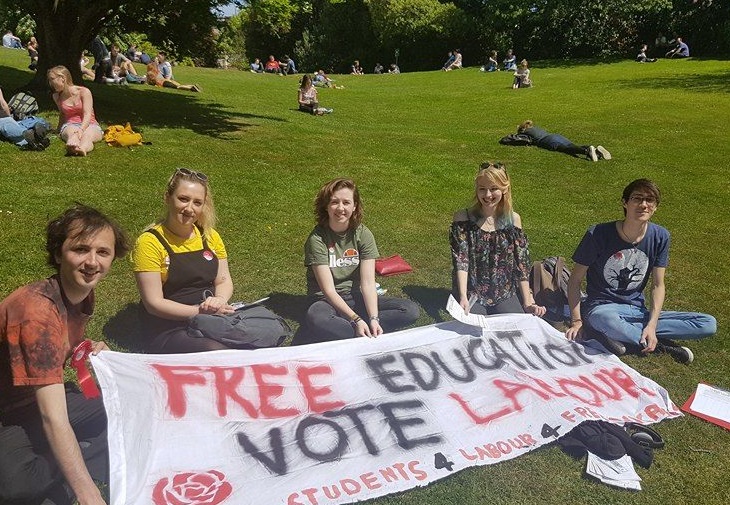 We received this report from an activist involved in Students for Labour for Free Education in Bristol.

Had a really inspiring day today, thought i’d share to inspire and say what worked well. Four of us met up with a banner, leaflets and sign-up sheets on clip-boards then went around in pairs. Most of the people we talked to were Labour, and a good third of them maybe signed up for canvassing, with more saying they’d tell their friends, and some undecided persuaded to vote Labour.

Me: Hi, have you decided who you’re going to vote for in the GE?
Person I approached: Yes
Me: Is it Labour?
Person: Yes!
Me: Have you heard about the polls this morning?
Person: No?
Me: They’re suggesting there might be a hung parliament, so the results could be close either way. We’re with Students For Labour For Free Education, we’re trying to get students active around some of their great policies, such as free education and £10 minimum wage. Because polls are so close anything could make the difference between a Tory victory or a Labour victory, or between either of them and a hung parliament. We’re trying to get people signed up to do canvassing to help out with this final push in the last nine days, do you think you’d be able to help out at all?
Person: Yeah sounds good!

Where they had exams, I persuaded them to come after their last one. Where they were going home, I said i’d pass on their details to wherever is their local Labour Party. Got pretty good response.

To get involved in Students for Labour for Free Education, email labour4education@gmail.com