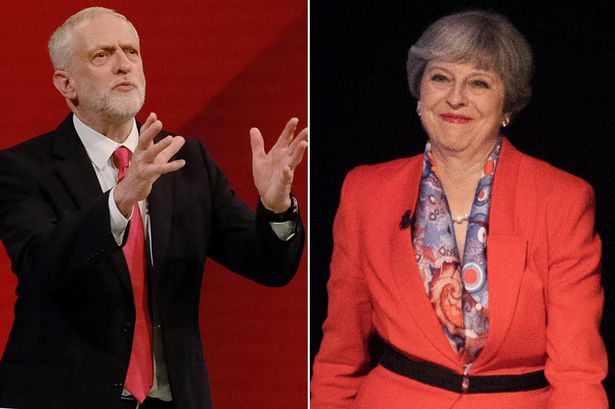 Well, before we can answer that, we need to think about what actually happened. The first thing to think about the televised leaders debate is that the “strong and stable” Theresa May refused to share a platform with Labour’s leader – despite the Conservatives’ campaign making the election about the personality of May versus Corbyn.

The Channel Four / Sky News leaders “debate” hosted by Jeremy Paxman wasn’t a debate. It was live, there was an audience, each leader was asked questions by Paxman and by members of the audience, but it wasn’t a debate between leaders.

And notably, Corbyn did not respond to attacks on his character with return attacks on Theresa May. Instead, he focused on the pragmatic arguments for public investment rather than cuts, for universal public services funded through progressive taxation.

Corbyn was grilled by audience members and by Paxman on his record over conflicts in Ireland and the Middle East. The Conservatives and their press have been running a fear campaign over what a Labour government led by Corbyn with John McDonnell as Chancellor would mean for the jobs of people working in the armed forces and in police forces.

Labour’s manifesto does not contain policies which Corbyn personally supports – such as replacing the unelected monarch with an elected head of state – but which may not be immediate priorities for voters wondering what he would want to do if he walks into Number 10 on June 9th. Paxman’s questioning of Corbyn over this issue of compromise was intended to dramatise the issue of Corbyn lacking majority support in the 2015-2017 Parliamentary Labour Party.

Instead of the instability of his leadership being a weakness, Corbyn portrayed it as a strength – in contrast to May’s reluctance to concede that, in effectively re-writing the Conservative manifesto policies on social care, she is responding to pressure from below.

The Guardian’s front page headline in the wake of the televised debate makes great play of Corbyn’s quip that in the Labour Party he isn’t a dictator but a leader. But, although they have an interest in playing up the Labour “threat” to the Tories, some Conservative aligned journalists have honestly conceded that his performance wasn’t a disaster.

In addition to traditional forms of party communication with voters, the Conservatives are spending a great deal on social media advertising in marginal seats. They have refused journalists requesting samples of their paid content, but we can assume that people seeing paid adverts in their newsfeeds are seeing direct attacks on Corbyn, praise for May, and little mention of the Conservative Party.

Theresa May called this snap election on the basis of strong opinion polling for her personally and for the Conservatives. Rather than using a snap election as a means of shoring up a hard Brexit wing of her party, we can assume she has used the opportunity to select candidates for marginal seats who will be willing to compromise over the French and German red lines for the Brexit negotiation – particularly over free access to EU markets, with no tariffs imposed on goods and services exported by UK firms likely to be conditional upon UK acceptance of free movement of labour.

The collapse in support for UKIP was assumed to be of immediate benefit to the Conservatives. For UKIP voters who used to say on doorsteps “we are Labour” rather than “we are UKIP” more recently, it is possible to win support on the basis of class policies. The approach of certain Labour candidates – pledging support for a “points based” migration system – is to make false promises and to sustain illusions in the idea that a force other than workers’ own self-organisation can “take back control”.

Challenged by Paxman on the question of ownership and control, Corbyn raised mutual and co-operative models of ownership. For Labour supporters, taking power will be as much about building it in our workplaces and neighbourhoods.

The significance for Labour of this televised event is that our leader did not distance himself from the idea of democratic control of policy-making in our party. The snap election has meant a rushed process of drawing up a manifesto, and using the structures introduced under a previous leadership opposed to full democratic participation in policy-making.