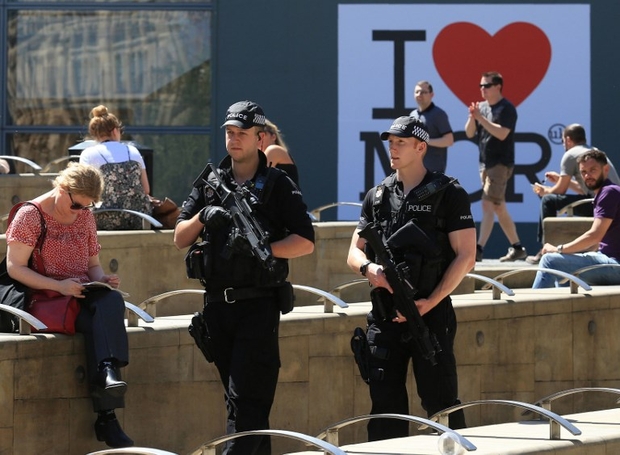 “Jeremy Corbyn has said that terror attacks in Britain are our own fault,” claimed Theresa May on Friday. “I want to make something clear… there can never be an excuse for terrorism, there can be no excuse for what happened in Manchester.”

It is a measure of the cynicism – and desperation – of the Tories and their press that Corbyn’s speech last week has been attacked in this way. Corbyn did refer to British foreign policy as a factor in any explanation of Islamist terrorism, but only in similar terms to many commentators, and indeed some Tories.

What Corbyn actually said was: “Many experts, including professionals in our intelligence and security services, have pointed to the connections between wars our government has supported or fought in other countries, such as Libya, and terrorism here at home.”

He went on: “That assessment in no way reduces the guilt of those who attack our children. Those terrorists will forever be reviled and implacably held to account for their actions.”

In truth his speech bent over backwards not to be construed in the way May and the Tory press then deliberately misconstrued it. More – it heaped praise not only the emergency services but on the military.

This was a mild, even-handed intervention in the debate, only pointing to foreign policy as one factor in understanding terrorism.

What of the argument itself, though? Is there a train of thought in Corbyn’s argument which does, as it is claimed, attempt to excuse the terrorists?

There are different ‘versions’ of the ‘Blame Western Foreign Policy’ argument.

At its most primitive it implies that the terrorists act simply from a kind of Pavlovian reflex to various (especially) US-led policies, most obviously the war in Iraq. This, crudest, version plainly fails to explain much at all: most obviously, why the vast majority of Muslims, for instance, don’t, despite these foreign policy outrages, feel motivated to blow up teenagers or sympathetic to such things; why often the terrorists aren’t personally from the countries affected (even in the Manchester case, it’s unclear if Salman Abedi’s action was specifically in reference to events in Libya); why the terrorists’ aims are so unspecific, even apolitical, but rather just an expression of general hatred and a desire to inflame more of it. In other words, such analyses fail to get to grips with the politics of militarist Islamism(s), movements whose existence and rise long predated the “war on terror”.

But there’s a much more cogent version of the argument, which is more what Corbyn seems to have had in mind. Islamic State/Daesh, for example, was formed in the aftermath of the US-led invasion of Iraq in 2003. There were many aspects to Western policy which fuelled the growth of what was to become IS, principally the utter lack of any sort of plan for what would come after the fall of Saddam, the decision to destroy the bureaucracy of the Iraqi state, driving thousands of Sunni Arabs into the arms of the jihadists, and the decision to back a Shia-sectarian government which made this worse.

Libya, where Salman Abedi was born, was in some ways a repeat of the same thing on a smaller scale. In that case the UK and France (with considerable ambivalence on the part of the US under Obama) decided to overthrow the Gaddafi regime, co-opting some of the Islamist forces who had been in exile (some of whom, indeed, had fought, in the 1980s, against the USSR in Afghanistan), but with scarcely any notion at all of what might replace the dictatorship. The result is more or less a failed state: Libya is divided, battle-torn, and a long way indeed from bourgeois democracy.

This process took longer than is sometimes implied. Democratic forces did counterbalance the Islamists for a while; and the IS-aligned forces in Libya are now on the retreat.

What this suggests is that Western policy played a part in Salman Abedi’s decision to massacre some kids at a concert, but not in the obvious sense. Terrorism is not a knee-jerk reaction to Western wars, but it is something which can breed in the chaos fomented by the failures of Western policy.

And of course the jihadi organisations (IS and al-Qaida and their affiliates) demagogically make use of any and every Western failure to recruit vulnerable, confused, or alienated young people.

To explain the growth of Islamism in Europe – either more broadly defined, or specifically the jihadi movements (the decisions by young people to go to Syria to fight, etc), one needs to look at more than ‘Western policy’. There are many factors at play. But for sure, as part of a wider, nuanced explanation, foreign policy, as Corbyn said, plays its part. To invoke it is not necessarily to relieve the terrorists themselves of responsibility for their own actions (and Corbyn’s speech could hardly have taken greater pains to avoid this error).

It is true that Stop the War, with which Corbyn has been personally associated, has been been opposed to all Western wars in a very un-nuanced way. It is the opinion of this writer, for instance, that though the outcome of military intervention in Libya was predictable up to a point, at the time – March 2011 – the only real alternative was to allow Gaddafi to survive and immediately massacre his opponents. Moreover, the rebel movement was calling for intervention. The proper socialist response was not to march in opposition to military intervention – as Stop the War did, if ineffectually, but to support the revolution against Gaddafi and warn about likely future problems.

Still today, to reduce a critique of Western policy in Libya to the fact of intervention is to miss a lot of the point.

Corbyn’s background in the Stop the War milieu will inform what he says now about terrorism and foreign policy. But what he has actually said is right, as far as it goes. And the Tories’ attempts to attack him for it should be denounced for the dishonest, demagogic scandal they are.

• Clive is a screenwriter and socialist activist based in London