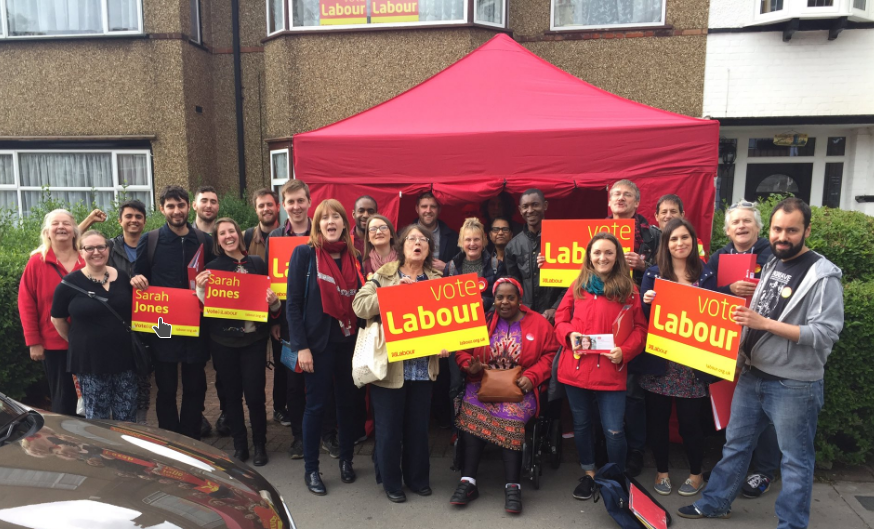 Both the general “buzz” and some issue polling suggest that a good public response to Labour’s manifesto and bad response to the Tories’ was built on by the latter’s disarray over their plans to further worsen the situation for those who need late-in-life social care (the “dementia tax”).

In any case, there has been major movement in the polls. It refutes the idea, repeated mantra-like by the Labour right and their friends in the press (and still being repeated), that a left-wing, Corbyn-led party cannot strengthen Labour support – and reminds us that the right-wing drift of British politics is not immutable.

Celebrate for a minute, if you haven’t yet, but then let’s get on with organising to push further forward.

As campaigning resumes, everyone who wants to see a Labour victory needs to throw themselves in. If you are already campaigning, keep it up! If you haven’t started yet, now is the time. Get in touch with your local Labour Party and your local Momentum group. Go canvassing (we’d recommend in a marginal or a seat with a left-wing candidate, but pretty much – anywhere). Do some calling, at the Momentum office or using something like the Labour Party’s Dialogue app. Help mobilise young people to vote. Volunteer to help on election day. Talk to your friends, workmates, neighbours. Put up a Labour poster in your window. Ask others to get active too.

2. Prepare for a backlash

The Tories and the right-wing press are already stepping up their attacks. It is nasty and will get nastier. In the current political context, some of their arguments may stick. The first polling is promising, but it would be very surprising if the horrific events in Manchester did not help the Tories as the political impact feeds through (fear and uncertainty leading to right-wing shifts, the fact that they are the government and so leading the response, the hiatus in campaigning, highlighting arguments about Jeremy Corbyn and “terrorism”). If there are setbacks, we must not become demoralised but keep up the pressure. It is still possible that the Tories will win a big majority, even if we get an impressive share of the vote. There is various polling which suggests improving headline figures for Labour do not tell the whole story.  Be prepared for the worst, but most of all fight for the best

3. Think through our arguments

A standard set of responses to the developing right-wing attacks against Corbyn seem to be emerging. Much of it is good left-wing sense, but we need to be critical. Challenging conspiracy theories on the fringes of the left is necessary but easy – we need to challenge ourselves and other activists we respect. Of course there are genuine issues about how to prevent further Islamist terror attacks, but is more police really the solution socialists should be advocating? Or take the idea that Britain’s foreign policy has made people here less safe. There are both rational and problematic versions of this argument. What were the politics which motivated the Manchester attack and why can such horrendous ideas appeal to a small but not insignificant layer of young Muslim people in Britain? Why is Islamism on the rise globally? What is the relationship between jihadist terrorism and Islamism more generally? What would it take to see a left and labour movement capable of undermining such ideas? How do we address arguments about “extremism”?

After many months of producing little policy, a strong manifesto has played a crucial role in getting Labour out of its hole. If the party had campaigned on positive left-wing ideas over the last year, it would be in a stronger position now. (And if dominant leaders of the Labour left, in Momentum, hadn’t spent so much energy insisting that it was illegitimate to develop and advocate policies for the party, that would surely have been more likely to happen.) Now the Labour right is desperately trying to avoid discussion of the party’s policies. Against the line of “Don’t defend Corbyn – talk about the local candidate”, we must insist “Defend Corbyn – and talk about policy”. We need a discussion among activists too, about how the ideas in the manifesto can be fought for, developed and (yes) improved after the election, under a Corbyn government or in opposition.

5. Prepare for a fight in the party

The bulk of the leading figures of the Labour right have demonstrated throughout the campaign that they are more interested in undermining Corbyn than winning the election or limiting the scale of a Tory victory. Even the way candidates were imposed was used, by and large, to impose right-wingers in as many seats as possible. A good result in the election will weaken them, but whatever happens they will continue organising to overthrow the leadership and, one way or another, disperse the left-wing majority of the party’s membership. We need to be prepared to hit the ground running after 8 June, to continue and step up the fight to transform the party. The deadline for electing conference delegates has moved to 8 July – we need to make sure we are prepared to stand. We need a coordinated drive for CLPs to send democratic rule changes and, from the start of August, left-wing policy to conference. We need to recruit more members to the party and, crucially, draw many members into activity. We need a serious push to build local Young Labour groups in as many constituencies as possible.

A re-elected Tory government will continue attacks on the working class and on democracy unless it faces much greater resistance; and a Corbyn government will face vicious attacks from the rich and powerful backed by obstruction from the Labour right. Either way, after the election, we need a strengthened Labour left with a renewed sense of purpose if we are going to make real headway – and that can only be built in the context of the strongest possible mobilisation for a Labour victory before and on 8 June.