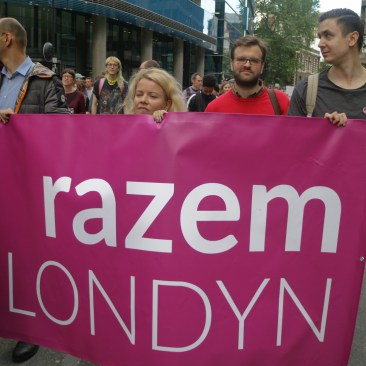 Thanks to Labour International (the section of the Labour Party for people living outside the UK) for circulating this statement from a variety of Polish left organisations.

We would add that Labour activists must fight for the party to do more to merit this support, by standing up clearly for freedom of movement.

For an interview with a Birmingham-based activist from Razem, which is supporting the statement, see here.

The Polish Left has come out strongly in support of a Labour Government led by Jeremy Corbyn. Different strands of the Left in Poland have supported the statement which calls upon Poles in the UK to support the Labour Party in whatever way possible in the forthcoming UK election.

The forthcoming parliamentary elections in Britain are of crucial importance for the whole of Europe. In recent years we have seen a right-wing surge across the continent, as the policies of austerity have led to a rise in right-wing populism and nationalism. In Britain, the Conservative Party government, led by Theresa May, is leading the country towards a disastrous hard Brexit from the European Union. Their aim is to make Britain a low cost economy on the peripheries of Europe and to use the opportunity to drive down salaries, workers’ rights and social spending. Simultaneously, this is all being justified by increasing hostility to immigrants living in the country and promoting xenophobia and nationalism. This has already resulted in a sharp rise in racism and hate attacks in the country.

This election has particular significance for Poland and for Poles living in the UK. The present government is dividing and weakening the European Union, which potentially will have extreme negative effects for countries such as Poland. The Polish community is now an established part of British society and has contributed huge amounts to the British economy and culture. However, the hard Brexit being pursued by the Conservative government puts the position of the Polish community at risk and is a direct threat to the well-being and security of Poles living in Britain.

The Labour Party has a clear alternative programme that includes opposing the government’s hard Brexit and ensuring that the country retains full access to the single market. It rejects the government’s programme of austerity and instead supports an economic strategy of public investment to boost economic growth and raise living standards. The Labour Party will protect and invest in the country’s vital public services, such as the National Health Service. The Labour Party actively opposes racism and xenophobia, supporting the rights of those from other countries to live in Britain without fear of prejudice and discrimination.

It is therefore imperative that the Polish community in Britain does all it can to make sure the Labour Party defeats the Tories in the parliamentary elections. We appeal to Poles living in Britain to vote Labour if they are able to vote and to support and help in the Labour Party’s election campaign. We offer our support to the Labour Party and its leader Jeremy Corbyn in their efforts to form a new progressive government in Britain.