(This article was published in Clarion issue 7, early in the general election campaign)

Marine Le Pen won only 5% of the vote in Paris, and 7% in some other major cities, but 21% overall in the first round of the French presidential election. Donald Trump got less than 10% in New York’s Bronx and Manhattan districts, yet led 62%-34% in small cities and rural areas.

In the 4 May local elections, Labour did better in Manchester. Polling for the general election looks bad in many small towns, but has Labour ahead in London.

Labour is ahead among voters under 40 and way ahead among 18-24 year olds. Older voters boost the Tories. Only 37% of 18-29 year olds voted Trump. In the French presidential first round, left candidate Jean-Luc Mélenchon won 30% among 18-24 year olds, with Le Pen on 21% and Macron on 18%. (Le Pen did well among the middle-aged, but, unlike the Tories and Trump, not among the elderly). 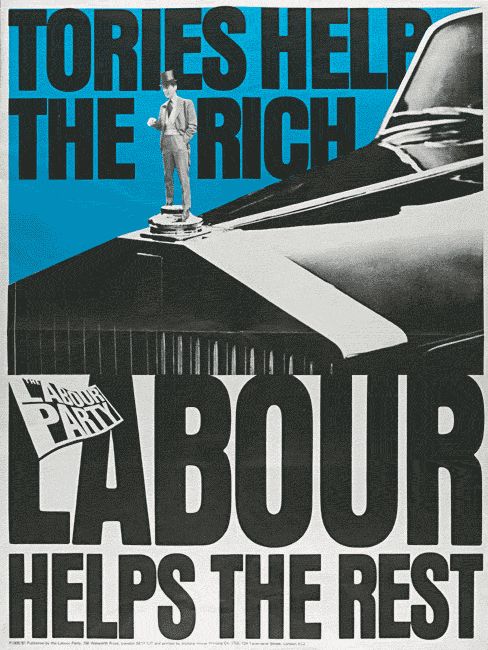 (Poster from the 1966 Labour general election campaign – a right-wing campaign under Harold Wilson!)

In 2-20 April polling, the Tories had a 17% lead over Labour among voters socially classified as “C2DE”. A number of worse-off working-class voters who went from Labour to Ukip may now be moving to the Tories.

Scan those facts, and you’re not surprised when a “research executive” at YouGov writes: “Class would tell you little more about a person’s voting intention than looking at their horoscope or reading their palms”.

Every canvasser knows that is not true. Big houses and luxurious gardens give you a poorer Labour score than a scruffy terrace or a block of council flats.

In part the figures mislead by misidentifying “the working class” with an important minority of the class. Time was when the bulk of the French working class were “ouvriers”. Now only 20% of the employed population are classified that way. The same has happened with “C2DEs” in Britain.

The “ABC1C2DE” categories for Britain were developed by advertisers, not social scientists, over 50 years ago. According to them only 15% of the population of Britain is now “working class” (D), and another 21% “skilled working class” (C2). In fact C1 (29%) and most people in B (23%) are wage workers exploited by capital too.

Those classified as manual workers, C2D, are often older and in declining industries. Trade unionists in Britain today have a better income and a higher level of formal education than the population’s average. That’s partly failure by the unions, but partly just a shift in where the bulk of the working class is.

It has almost always been the case that left politics has relied more on the better-off and younger sections of the working class – the sort of people who make up the young, big-city base (or potential base) of the left today.

Wilhelm Liebknecht, at a congress of the German Social Democracy in its great days, once remarked, as something obvious,that the delegates were of course mostly better-off workers.

In 1938 Leon Trotsky summed up a century of experience across the world: “Trade unions, even the most powerful, embrace no more than 20 to 25 per cent of the working class, and at that, predominantly the more skilled and better paid layers.The more oppressed majority of the working class is drawn only episodically into the struggle…” (He was too pessimistic, it turned out, but he was summing up the experience of many countries as it was then – and still is in many countries.)

Other factors have often cross-cut the working-class vote. Until about the 1980s, the best predictor of voting in France was whether you attended (Catholic) church or not. For a long time,women generally voted more right-wing than men; now they generally vote more left-wing. The young are usually more left than the old. Today – happily in general, unhappily for voting patterns — a lot more working-class people survive into conservative old age.

The relative isolation of the Paris Commune, the pivotal role of St Petersburg in 1917, and even the leading role of the London Trades Council for a while in England-wide trade union history, show that the centrality of big cities is not new.

Much depends on the processes through which the younger, more educated, slightly-better-off, big-city people of the working-class left get organised and gain influence and hegemony in the broader working class. They are not automatic.

The Tories under Disraeli gave urban male workers in Britain the vote with the Second Reform Act in 1867 – and, despite the fears of some Tories, soon benefited. Disraeli was prime minister again from 1874 to 1880. It took decades more and great struggles for independent working-class politics to develop.

Islington, known today as Jeremy Corbyn’s base, returned Tory MPs for two of its three parliamentary seats from 1886 through to 1906. Industrial South Wales sent landowners and posh industrialists to Parliament until well into the 20th century.

World War 2 and its aftermath made a big shift in many countries. Trade unions became much bigger, and organised new industrial concentrations. Young men with their political horizons broadened by meeting others from diverse backgrounds in the armed forces spread left-wing ideas to smaller towns and cities.

Labour started to assume its working-class vote was an automatic default. But by default, as Marx put it, “the ideas of the ruling class are in every epoch the ruling ideas”.

Over long decades since then – with ups and downs – working-class alignment with trade unions,with the labour movement, and with left-wing politics has loosened and decayed. It has not been re-made, reorganised, reshaped adequately.

That shortfall has hurt particularly in recent decades, when factories — not the working class in general, but factories specifically — have been moved out of big cities to small towns or the very edges of the cities, and the labour movement has often failed to follow them and organise sufficiently.

Class is still the most potent axis of politics because it is the axis of the great inequalities of power and wealth which structure our lives.The left will only lose itself searching for another axis. But the axis has to be made and shaped by political effort. In the first place, drawing young left-wingers into ongoing organisation and not just clicktivism. In the second place, driving the trade unions out to organise the unorganised.