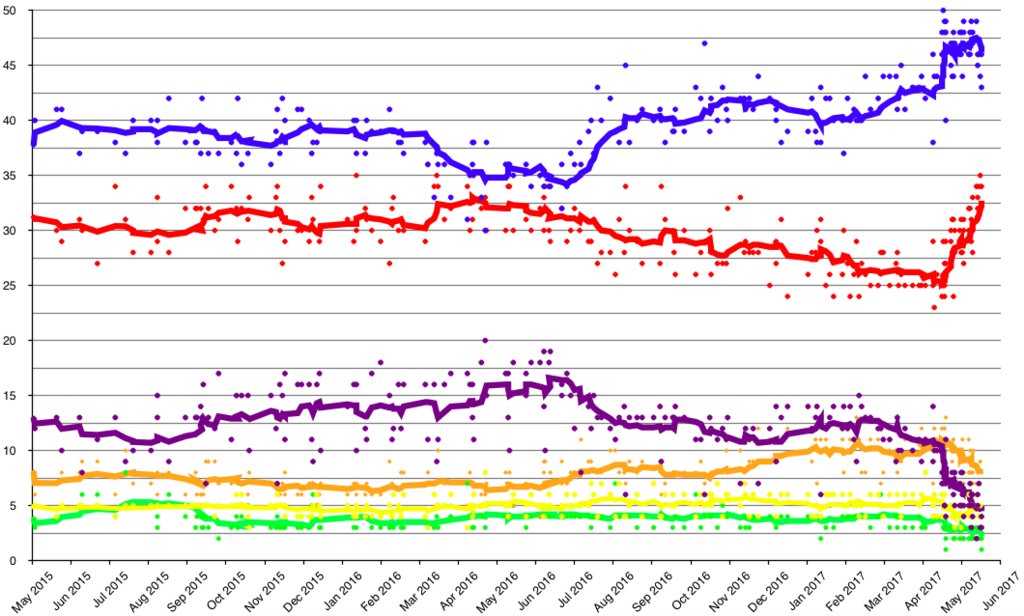 Four of the last five opinion polls have the Labour Party on 34 or 35pc; one has 33pc, but that polling company had a low figure a week ago and has registered a 5pc rise in that time. Two of these polls show the Conservative lead down to “only” 9 points. Obviously this is in large part speculation, but some of the factors seem to be:

1. Left-right polarisation. The Clarion has more than once commented on our fear that the election would polarise around Brexit, with Labour losing out to the Tories and UKIP on one side and the Lib Dems and maybe the Greens on the other, particularly in light of its jumbled policy on the issues. In fact there is a left-right, Labour-Tory, polarisation, with a partial reversal of the trend away from two-party politics. The Lib Dem revival, so gleefully trailed among the commentariat, is coming to little. It must help there that, even before the publication of the manifestos, the difference between the two main parties is greater than for decades.

2. Labour’s manifesto. The manifesto and the campaign around it, breaking out of the neo-liberal pattern of the last three decades and in part out of the hesitation and fumbling of the last 18 months, has inspired its activists, many of its core supporters and many others. It also seems to have started to reach a layer of people who before did not really know what the party stood for and were easy prey for nationalism and for the media campaign against the Labour leadership and Corbyn in particular. Despite wild denunciation by the right-wing and sniffy cynicism from the liberal media, the general reaction has been heavily positive. The wall of “Nothing is possible” is crumbling at least a little; for the first time in decades, working people are daring to feel hope in an election.

3. The Tory manifesto. The Tories have displayed the tendency which US socialist James P Cannon, discussing trade union struggles, described as “the bosses always go too far”. Made over-confident by their massive lead, the recent accelerating right-wing trends of British politics and the Labour Party’s ongoing disarray and huge parliamentary fifth column, they decided not to offer the electorate much of anything beyond a strong leader well booted to deliver more kicks. This included deciding to attack an important part of their voting base, older people, which has now backfired on them. We’ll see whether their u-turn halts the bleeding.

There is much discussion about Labour winning a larger share of the vote than under Ed Miliband in 2015; on the current numbers, we could win a larger share than Tony Blair did in his last election victory in 2005, 35.2pc (which would not necessarily prevent us from losing seats).

Imagine what would be possible if Labour was campaigning as a united force, rather than with many of its most prominent and visible leaders attempting to undermine the leadership, the manifesto and the party as a whole. In these circumstances, what has been achieved so far is very encouraging.

All this is provisional, of course. The right-wing campaign against Corbyn, aided by some Labour MPs, will now ramp up. Two weeks is a long time. We should steel ourselves for reversals. Moreover, polls can mislead. But the events of the last week are a reminder that the Tories are not impregnable and that it is precisely left-wing, pro-working class policies and politics that can break through.