(This is the front page article from Clarion issue 7, which came out on 12 May) 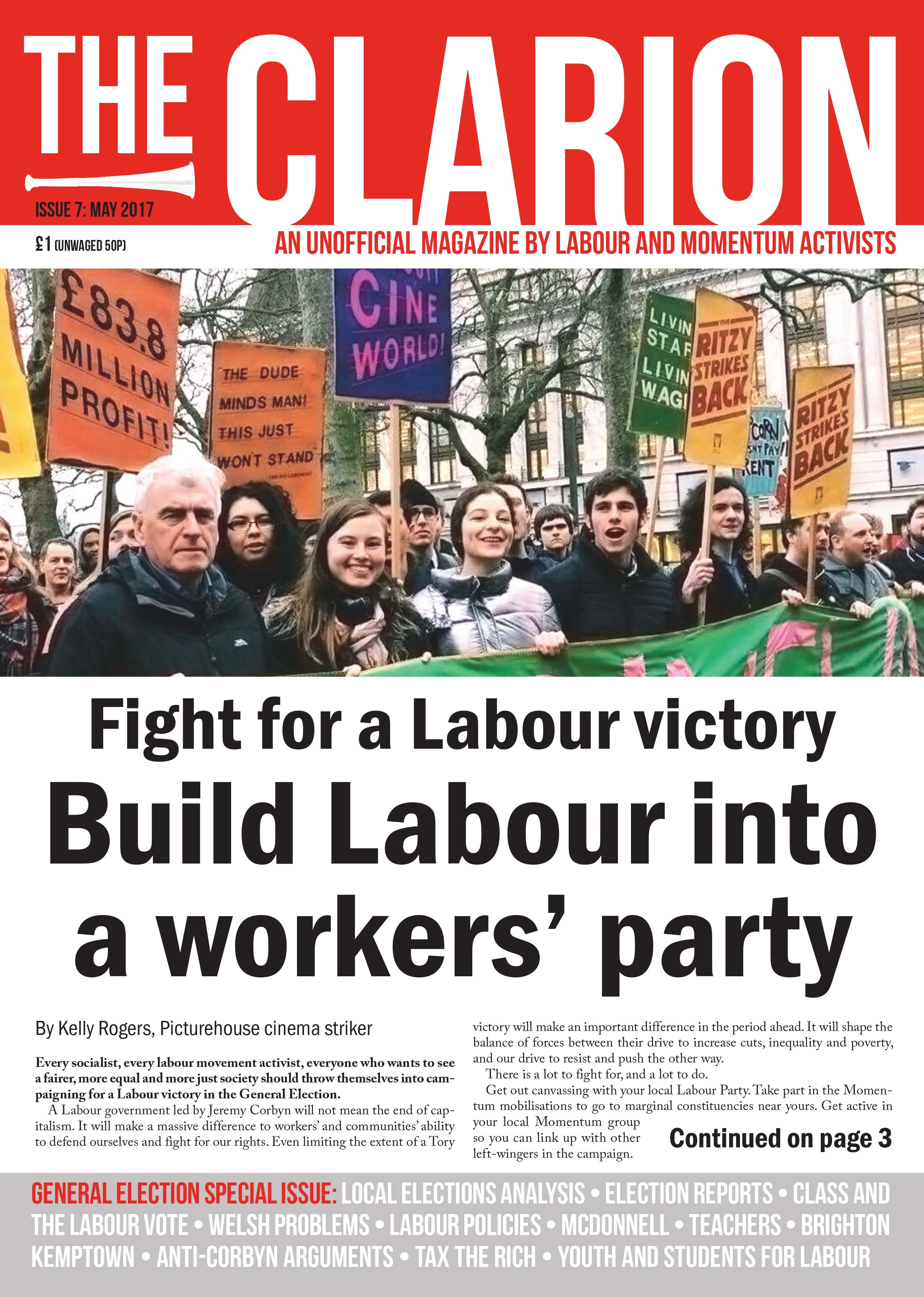 Every socialist, every labour movement activist, everyone who wants to see a fairer, more equal and more just society should throw themselves into campaigning for a Labour victory in the General Election.

A Labour government led by Jeremy Corbyn will not mean the end of capitalism. It will make a massive difference to workers’ and communities’ ability to defend ourselves and fight for our rights. Even increasing the Labour vote and limiting the extent of a Tory victory will make an important difference in the period ahead. It will shape the balance of forces between their drive to increase cuts, inequality and poverty, and our drive to resist and push the other way.

There is a lot to fight for, and a lot to do.

Get out canvassing with your local Labour Party.Take part in the Momentum mobilisations to go to marginal constituencies near yours. Get active in your local Momentum group so you can link up with other left-wingers in the campaign.

In the time remaining before the 22 May deadline, help register people, particularly young people and students, to vote. Talk to people at work, on your campus, in your union, to your friends. Put up a Labour poster in your window.

The outcome of the election will also make a difference to what happens in the Labour Party. The better the election result, the bigger the possibilities for taking forward the campaign to transform Labour.

A lot of time and opportunities have been lost over the last 18 months. We need to push forward with the fight to change Labour policy,structures, and way of operating, including at this year’s party conference. With the deadline for naming CLP delegates now a month after the election, the left needs to get organised.

If you haven’t joined Labour yet, join now and help the struggle.

The central idea and axis in our campaign to shape Labour should be class. We should fight to build and develop Labour, to make it more of a workers’ party. What does that mean?

We should seek to make it a democratic party, providing spaces in which working people can come together to debate, discuss and decide action, rather than having decisions imposed on them by a caste of media-oriented political operatives and middle-class professionals. We should seek to maintain and build the party’s mass membership, involve it in activity and discussion and draw in more people from sections of the working class currently often alienated from official politics (like blue-collar, less formally-educated, and BME comrades).

As a workers’ party, Labour should put forward workers to represent it. Labour candidates should be people with a current or recent record of rank-and-file trade union or community activism, not aspirant professional politicians who have done their time as an MP’s researcher or running an NGO.

Labour should throw itself into supporting workers’ struggles, like strikes, rather than standing back a bit nervously from them while expressing mild disapproval (as it often did pre-Corbyn) or mild support (as it often does now). Labour Parties should become local forums for supporting struggles and campaigns.That obviously means a serious discussion about what Labour councils are doing – the shameful situation where workers find themselves in struggle not with but against Labour councils needs to end.

And we need policies to match – bold, clear policies which at least meet immediate working-class needs, like scrapping all the laws limiting trade union action and taxing the rich to reverse all cuts and rebuild our services. We need an end to equivocation and retreat on migrants’rights. In most respects the manifesto is a good start, but there is a lot to do to fight for, build on and improve it.

Our movement needs to get out there and seek to shift the political narrative by making class central to politics again. Class never stopped being central to the way society works – it is the basis on which, over the last decades,the rich have become much richer at the expense of the majority and reorganised our society to make it ever more brutal, unequal and mean. But only if we reassert that reality explicitly and forcefully can the movement, and Labour, begin to turn the tide.

Young and old, black and white, big city and small town or village, Leave and Remain, British-born and migrant – all of us have been hammered, and yet part of that has been successfully dividing us. Only a renewed class politics can unite us across these divides and provide the basis for a movement which really stands up for “the many, not the few”.