Over a hundred people turned out in heavy rain to welcome John McDonnell at an afternoon rally in Derby North today. Despite the battle bus being over an hour late, the lively crowd remained in high spirits. The crowd was a real mix and included Unison members involved in the Derby Teaching Assistants’ dispute.

Derby North is at the top of the Labour target list after the Conservatives took it from Labour in 2015, beating Labour’s Chris Williamson by only 41 votes. (The constituency has a decades-long history of being marginal and was Tory 1983-1997.) Corbyn supporter Chris Williamson is the Labour candidate again and has received support from across the Midlands. Last weekend Momentum members from Leicestershire went to leaflet and canvass and Labour members from across the region are going regularly to offer support.

Chris addressed the crowd and passionately talked about the struggle faced particularly to young people in his constituency. He raised Labour’s manifesto pledges around precarious work, tuition fees, child poverty and the minimum wage. Good news for sure for Derby’s young people. 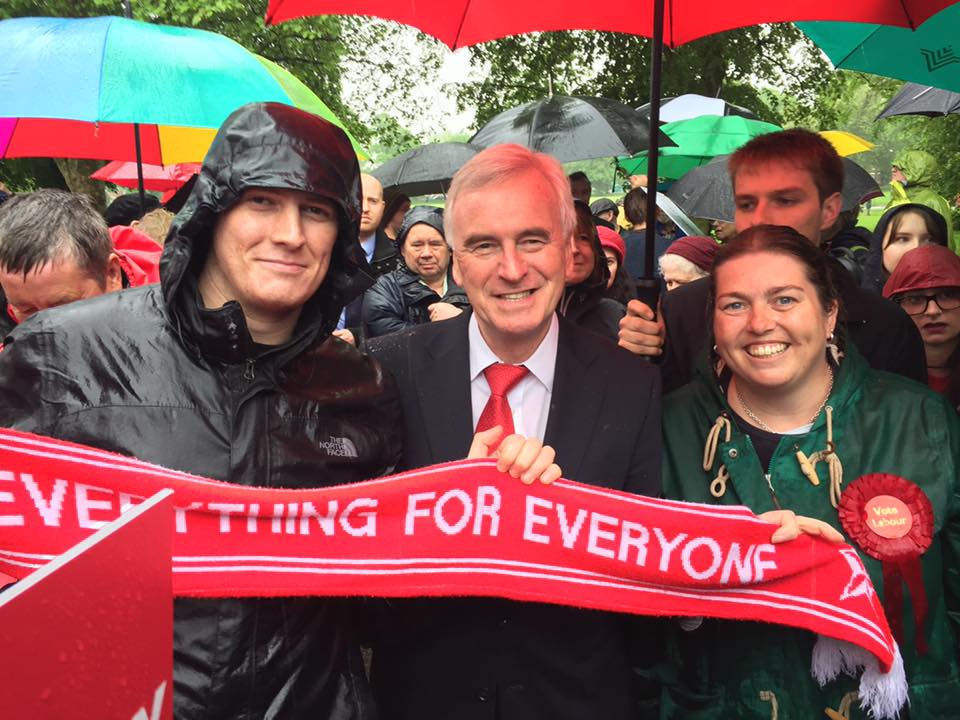 John McDonnell in Derby, with Liz…

McDonnell kicked off with a joke, blaming train delays for his late arrival and pledging that this won’t happen with a Labour government. John went on to talk about the plans to renationalise public transport and integrate the entire transport system. This was welcome news in Derby where Bombardier is based. John, who had come to Derby in 2010 to help with the Labour campaign and visited Bombardier, assured the crowd that Bombardier has the capacity to build enough trains for the entire network.

John was keen to promote Chris Williamson’s green credentials, which may have been some comfort to the Derby North Green Party who has helpful stood aside to ensure a Conservative defeat this time round.

Derby North needs a Labour MP in parliament. In 2011, households had nearly 9% less disposable income than the UK average, things have far from improved since then with increasing numbers of people regularly reliant on food banks. But win or lose, party member in Derby as across the country must work hard to ensure the space for talking about socialist ideas is not just protected, but expanded after this election.