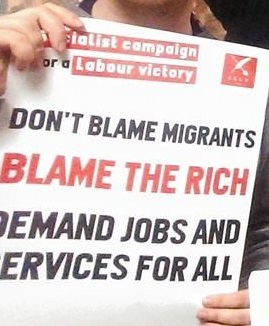 Yesterday, Jeremy Corbyn solidified a position that he has been dancing closer and closer to for some time: he has stated that under Labour, free movement would end after Brexit. This position is in the final version of the party’s election manifesto.

This move is a surrender to the relentless anti-migrant pressure he has faced from much of the right of the party and, shamefully, some of the left. To his credit, he held out much longer than many on the left, notably the Momentum leadership which completely disregarded the resounding pre-coup vote to defend migrants and free movement. But this is no excuse: the capitulation is a big mistake and we need to push for a reversal.

The supposedly “socialist” argument against free movement hinges on the assertion that immigrant workers undercut and undermine the wages, conditions and job security of domestic workers. Advocates of this idea, from Paul Mason to Len McCluskey, argue – absurdly simplistically – that the immutable forces of supply and demand mean that more workers means lower wages. But it’s just not true.

Researchers have shown that immigration from the EU has not been significantly associated with wage cuts, unemployment or deterioration in public services. This is simply fact. And it’s not exactly surprising, since migrant workers – being human beings, a fact apparently forgotten by those who talk about “social dumping” as if migrant workers are just passive, senseless materials transported across borders and unloaded at will by capital – need to eat, drink and live too, creating demand and more jobs.

In fact, what risks undermining wages and conditions is more immigration controls – as testified by activists in Switzerland. When reforms make migrant workers more precarious by denying them the safety net of unemployment benefits or making their right to stay contingent on keeping their job, or outright make their employment illegal, it becomes easier for employers to turn the screws and intensify exploitation. You’re less likely to object to poverty pay and illegal working conditions if speaking out means destitution or deportation (indeed, employers have shown themselves happy to benefit from undocumented workers’ labour until they begin to organise, then use border agents to break up campaigns and unions – for instance against SOAS cleaners in 2009). And this will only be made worse by Labour, the left and the trade unions taking a stance politically hostile to immigration and immigrants, making it all the harder to unite and organise British and migrant workers together to resist such attacks.

Anti-migrant sentiment is powerful and widespread in this country. That’s a result of decades of political work by the racist right, arguing and convincing people that migrants are to blame for low wages, unemployment, failing services and a housing crisis. The function of these lies is to distract and divert attention from the real culprits – our bosses and landlords, the rich and powerful and the governments that serve them, cutting wages and services and amassing ever more of the wealth we produce. It’s straightforward divide-and-rule, hoping to prevent the working class from recognising its common interest across the artificial lines of race and nationality and acting together to reclaim some of the riches hoarded in the mansions, banks and businesses of the rich.

For too long, Labour’s response was to meekly accept, and even parrot these lies – propping up the ideas of the racist right in the vain hope that a milder, prettified version of a xenophobic Conservative programme could win votes. This was not only a betrayal of migrant workers, but British workers too: it’s our responsibility to offer real solutions to the problems facing workers, not false scapegoats. And it hasn’t worked. For every inch given to the racists, they have taken a mile. When reactionary ideas are widespread, there is no solution for the left other than staking out an uncompromising anti-racist, socialist alternative, and putting in the work to win hearts and minds for it.

Jeremy Corbyn’s leadership should be a break with the mistakes and right-wing policies of the past. Labour doesn’t need to pander to these lies. We now have at least the beginnings of a real solution, represented by policies like taxing the rich, raising wages, creating jobs, funding services, rebuilding the NHS, controlling rents and building homes, as well as restoring trade union rights so that migrant and British workers can organise together to beat exploitation. And we have half a million members who can go door-to-door and workplace-to-workplace, convincing people of this alternative. If we committed ourselves to the task, we could turn the tide against anti-migrant politics.