There were 30,000 people in Trafalgar Square on 4 November 1956 to protest against the Tory government’s invasion of Egyptto re-take the Suez Canal, which had been nationalised by the Egyptian government.

30,000: it doesn’t sound very big. In fact it was the biggest demonstration in Britain for 30 years, since the General Strike of 1926. There had been decades when there were few demonstrations, and in those days fewer people could afford the time and money to travel to protests.

The pattern-breaking protest was organised, not by any radical left group, but by the staid, right-wing Labour Party leadership around Hugh Gaitskell. 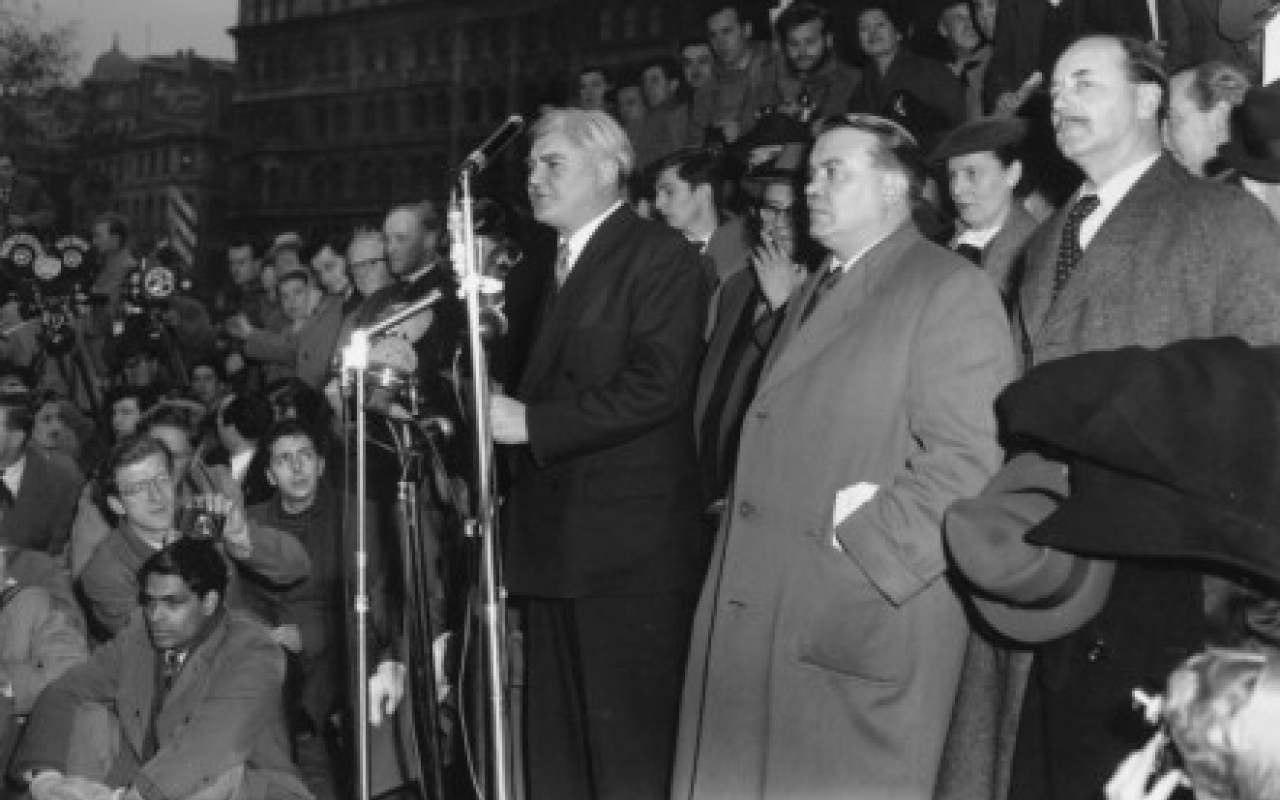 Aneuran Bevin speaking at the 1956 demonstration

It is disconcerting and disappointing that Jeremy Corbyn’s left-wing Labour leadership has proved less willing to rally people on the streets against the Tories than Gaitskell was. At the NHS protest on 4 March, estimated at over 200,000 people,Jeremy Corbyn spoke, and many local Labour Parties mobilised, but the Labour Party as such abstained.

Labour has called no street protests since Corbyn became leader. Tony Benn started to define himself as a left-winger (he had previously, since becoming an MP in 1950, been very middle-of-the-road) by leading a 30,000-strong demonstration in support of the workers’ occupation of the UCS shipyard in Glasgow on 23 June 1971. He did that as an official representative of the Labour front bench, then led by Harold Wilson.

On 18 November 1976 Labour’s National Executive supported a 40,000-strong weekday demo, initiated by the public sector Nupe (now merged into Unison), against cuts made by the Labour government. Jim Callaghan,the right-wing Labour prime minister of the time, did not like that. But once Labour was in opposition, even Callaghan felt obliged to call an official Labour Party demonstration against the first instalment of Thatcher’s cuts. 50,000 turned out on 28 November 1979, a weekday.

In November 1980 Michael Foot succeeded Callaghan as Labour leader. Foot, like Corbyn, had a left-wing background. Unlike Corbyn, he had been integrated into the Labour establishment well before becoming leader. He had served as a loyal deputy to Callaghan in government since 1976. Foot, as leader, would turn on the left.In 1983 the Labour candidate in the Bermondsey by-election of 1983, Peter Tatchell, for supporting extra-parliamentary action against the Tories; the same year he made an unsuccessful attempt to purge Militant (now the Socialist Party and Socialist Appeal) from the Labour Party.

Yet, as Labour leader, Foot far exceeded the current leadership in his own support for action on the streets.

He spoke (and so did Neil Kinnock) at the CND unilateral nuclear disarmament demonstration of 24 October 1981, 250,000 strong, generally reckoned as the biggest demonstration ever in Britain until the 2003 protests against the invasion of Iraq.

On 22 September 1982 he led a demonstration supporting the health workers’ pay dispute.In June 1983 he addressed a rally at the end of the People’s March against unemployment.

When Neil Kinnock became Labour leader in October 1983, he set about putting a stop to Labour being active on the streets. He set a pattern which was continued by John Smith and Tony Blair and Gordon Brown and Ed Miliband, and should be broken by Jeremy Corbyn.

During the 1984-5 miners’ strike, Kinnock came to a picket line only once and briefly, on 3 January 1985, when the strike was plainly going down to defeat.

At the next big demonstration against Tory policy – the 250,000-strong poll tax protest of 31 March 1990 – Kinnock kept his distance. Only 30 left-wing Labour MPs backed it, including Jeremy Corbyn and Diane Abbott.

That demonstration was a high point of a movement which by the end of 1990 had forced the Tories to start proceedings to repeal the poll tax, completed in 1993, with no thanks to the Labour leadership.

Jeremy Corbyn and those around him should remember that record.