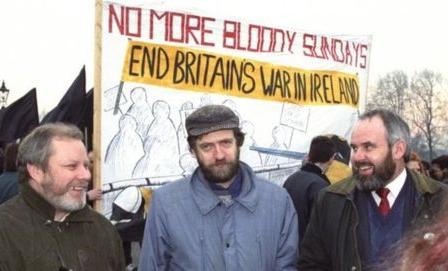 Desperate Tories have accused Corbyn of having links with the IRA – but what is the truth? Simon Hannah examines the politics behind it.

Corbyn, like a lot of the Labour left (and the Irish community in Britain) backed the cause of Irish unification. This is based on viewing the creation of the Protestant Northern state as an act of imperialism by Britain and something that should be opposed in favour of a united Ireland for both Catholics and Protestants. The Protestant minority was made an artificial majority by the British through annexing the north into the United Kingdom in 1922. They then enjoyed privileges and rights that the Catholic minority in the north were denied (better jobs, relatively free from police harrassment, better housing, etc).

This is why the left has historically backed reuniting Ireland.

You can disagree with that if you want but supporting the cause of Irish reunification is not an extremist view. In a recent poll 28% of the Protestants in the north now back a united Ireland!

Provision for a united Ireland was also included in the Good Friday Agreement, a deal pushed by John Major and signed under Tony Blair that provided for a power sharing agreement. Unity was based on the proviso that a majority of people in the north and the south backed reunification.

Jeremy Corbyn’s support the cause of republicanism inevitably led to political connections with Sinn Fein who were the political movement promoting reunification. He and McDonnell criticised the peace process of the 1980s because it would only lead to ‘an assembly’ in the north and a power sharing agreement that left the north in the hands of the UK.

Whilst Corbyn himself never advocated urban guerrilla struggle of the kind that the IRA carried out, he was clearly sympathetic to the general cause of republicanism and opposed the horrendous violence of the British state in Northern Ireland which saw widespread human rights abuses against suspected republicans, including internment (imprisonment without trial) and where British ministers in the early 1970s authorised the torture of prisoners. There is also widespread evidence that the British state was involved in collusion with Loyalist terror gangs which prolonged the troubles considerably.

The armed struggle in Ireland was a fight against an occupying army that had carried out the ‘Bloody Sunday’ massacre in 1972. The lefts sympathy with people fighting a national liberation struggle have to be seen in the context of also backing the Palestinians, Kashmiris, Tamils and the Sandinistas in Nicaragua.

What Corbyn and others on the Labour left backed at the time was negotiations with Sinn Fein. They were pilloried for ‘wanting to talk to terrorists’. The reality though was that every Prime Minister from Ted Heath to James Callaghan, Margaret Thatcher to John Major had secret negotiations with IRA and Sinn Fein leaders. The crucial difference with Corbyn and the left is that they wanted the talks to be made official and open as the only way to take the process of Irish national rights forward.