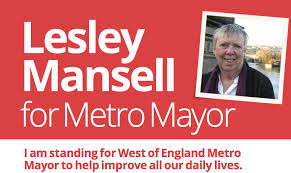 I’m an equality and diversity manager in the NHS, and I’ve worked in many other jobs including higher education and the engineering sector. I’ve been a Labour Party member for 30-odd years, and a trade union member longer – currently a member of Unite the Union. I’m Secretary-Chair of North East Somerset CLP and a councillor in Westfield, South of Bristol. I was selected as the Labour candidate for the West of England metro mayor, which covers Bristol, Bath and North East Somerset and South Gloucestershire, by a substantial majority.

I’m very much on the left and a strong supporter of Jeremy Corbyn.

You came very close to winning. Did you expect that? What’s your analysis of the result?

I did expect to win, so it was disappointing, but I was only two percent off. To put that in context, the mayoral region covers nine parliamentary constituencies, of which only three are currently Labour. So it was a big vote. A lot of Labour supporters were reluctant to vote because they didn’t want a mayor. Unfortunately the Tories wanted the mayor so they could come in and take more control and it seems that’s what they’ve done.

At the same time, it was a brilliant campaign. People really pulled their weight, especially in Bristol. Lots of members, from all wings of the party, got out leafleting and door knocking. We delivered 180,000 of the first leaflet, 360,000 of the second. The unions were brilliant too. Lots of people did phoning, including Momentum members in London. A big thank you to everyone who helped.

What issues did you campaign on?

I started with Jeremy Corbyn’s ten pledges. Then there were issues which are within the remit of the mayor – housing, transport, the economy. Transport is a very big issue. Bus service cuts and deregulation are continuing to work themselves through and the service is particularly bad in rural areas. A lot of people have to give up college courses because they can’t afford the bus fare. I’m also a member of the Co-operative Party and we advocated a public, co-operative bus service where the money goes back into the services.

I also campaigned very strongly on equality, which again is a big issue in the region. Black people here earn ten percent less than white people. I raised equalities issues through my manifesto and through advocating an equality charter I campaigned for everyone to sign. I was the only women candidate in the election so that was an interesting dynamic.

On housing, it’s the issue that exists in many places, of prices and rents rocketing and low equality. I advocated a charter for tenants, working with the ACORN community campaign. I tried to tie the issue of fair rents together with the demand for fair wages across the West of England.

For now we’ve got a Tory mayor but I’ll be working with community organisations to hold him to account and insist he carries out the ideas he stole from me during the campaign.

Many on the left criticise the idea of elected mayors as undemocratic and something Labour should fight to abolish. What do you think?

Well, metro mayors are not quite the same as local mayors. Their powers are very restricted. If I’d been elected I would have been tempted to go to Jeremy Corbyn on 9 June and said we need more powers so we can deal with the issuse in our region. On the other hand there is no reason that regional representation couldn’t be a more collective type of body.

What do you want to see the next Labour government do?

Strong action on housing, and on equalities. Money should be spent on public services, not handing it over to private companies. We need more public ownership and a more mixed economy. At the moment we’ve got an economy that works for the few, not the many.

We’re facing an uphill battle in the general election. What would your message to activists daunted by that be?

Don’t be daunted. When you look at the way the right-wing media are targeting Jeremy Corbyn, it’s hard, but we have to get our members out there talking to people. When people say, I don’t like Corbyn, if you talk about his pledges and his policies, they get on board. The Tories are making a real mess with Brexit, the economy is tanking, and we’re losing thousands of jobs already. It’s going to get worse, and the only people who will benefit are the City and the rich. So there is a lot to play for. We’ve got to get out there and do everything we can for a Labour victory.

Some members are feeling frustrated, and we’ve got to change the party and make it better, but the first step towards doing that is to defeat the Tories.