For almost a year, until it was abolished, I sat on the national Steering Committee of Momentum, elected by its National Committee.

If there was any point in me being there, it was to argue for and push the committee to support workers and communities struggling to fight against austerity; racism; attacks on migrants’ rights and so on. And to argue for Momentum develop and fight for a positive set of demands to improve the lives of working-class people. I saw it as my job to argue and push for the committee to act with all the confidence the Corbyn surge had given us, give leadership and direction to the movement and act as a counterweight to the pressures the right were (and still are) putting on Corbyn and McDonnell.

With all this in mind, almost exactly a year ago, I submitted a simple motion calling on the committee to support the occupation of the Carnegie Library in Lambeth and the massive union and community campaign that was going on to defend library services around it. I wanted Momentum to make basic solidarity with the library workers defending the service they provide and the community fighting to defend itself. I also wanted to start a wider discussion about Momentum’s strategy for how Labour councils should deal with cuts, but the motion didn’t say that – it simply called for public support and promotion for the occupation and campaign. 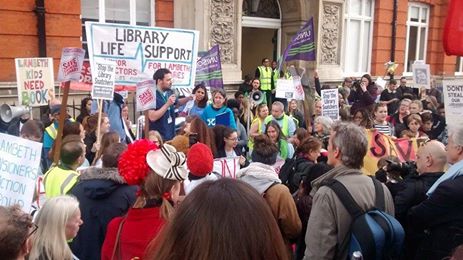 A junior doctor speaking outside Brixton library at the mass Lambeth demonstration to support the occupation and stop library closures, April 2016

This was just the third SC meeting but already I was starting to doubt the intentions of some of the people on the committee. Nonetheless, the response I got staggered me. The two minutes I got to motivate my proposal were filled with blustering exasperated noises from SC chair Jon Lansman. The replies I got from various members of the committee were in a similarly hostile vein. The arguments used against my motion were as follows:

1. The Steering Committee should not take a position on local struggles (!) Why on earth shouldn’t Momentum nationally support a local action? This simply makes no sense, particularly given the national context of austerity being imposed on local government and how a local battle could spark and inspire similar actions around the country.

2. The campaigners were hostile to the Labour Party – even though many were Labour Party members and Lambeth Momentum was playing a central role in the struggle.

3. There was an issue about Progress, who run Lambeth Labour Party, accusing library campaigners of being racist for challenging then Lambeth councillor and now GLA member Florence Eshalomi about the library cuts. This was an accusation led by Blairite MP and former Lambeth council leader Steve Reed. Really this grotesque slander was not worthy of reply, but I pointed out to the Steering Committee how many of the Lambeth workers and community campaigners, not to mention the community the Carnegie served, are themselves black.

I don’t know what arguments Lansman, Sam Tarry, Christine Shawcroft and Cecile Wright actually believed and what they were using opportunistically, but in any case, the majority of the committee rejected my motion. They caved to pressure from Progress and betrayed the workers and community fighting in Lambeth, including our own Momentum members.

I didn’t write this up publicly at the time because, having consulted with some Lambeth activists, we agreed it would demoralise people during the heat of battle. After that, the moment seemed to have passed. Now, though, during the anniversary of the struggle, when people are looking back at it, I feel it’s my duty to do so.

This bizarre decision on Lambeth libraries was obviously indicative of the general conservative direction Momentum was heading in. Now, on the initiative of its left members, the new National Coordinating Group has said it supports the Derby and Durham TAs, as well as the Picturehouse workers (are these not local struggles?!) But the Momentum office seems to have done little about it – these struggles were not featured at the Momentum dayschool in Birmingham and Momentum has done little if anything to promote them.

I do feel quite resentful about what happened with the Lambeth libraries occupation, but my purpose here is not to express bitterness but try to help the movement learn the lessons and do better in future. Serious socialists in Momentum and the labour movement more generally have to continue to take a lead on supporting local, national and international campaigns to defend and improve working-class living standards and rights. That should be a central part of what we do in our unions, through our local Momentum groups, through networks like Grassroots Momentum, through the left representatives on the NCG and through our Labour Party branches and CLPs.