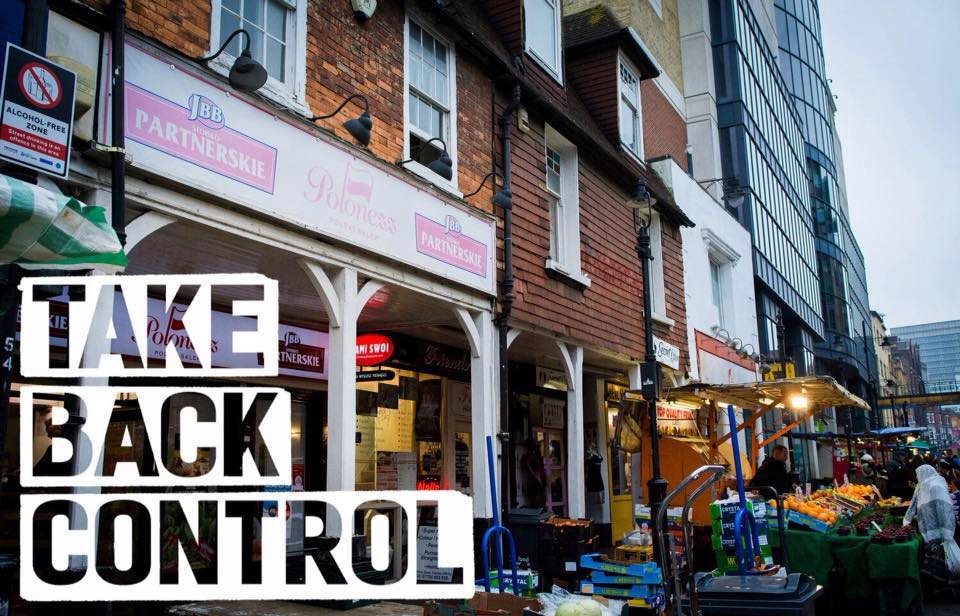 I participated in and ran a Clarion stall at the “Take Back Control” event organised by The World Transformed collective and local Croydon (I think mainly Croydon Momentum) activists on 8 April. It was an impressive and positive day in a number of ways.

Although attended by people from across South London, not just Croydon, this was basically a local event: but it attracted 200 people, possibly more if you count the evening social which I couldn’t stay for. This compares favourably to the 400-450ish at the national Momentum dayschool in Birmingham on 25 March, which unlike this was organised by an organisation with quite a large office. In addition, the audience was much younger and more diverse than either the 25 March event or the Grassroots Momentum conference on 11 March.

There seemed to be a good mix of experienced activists and newer people there. Speaking for myself, as someone promoting a publication as well as being active in various campaigns and organisations, I found it useful both in terms of meeting new people and linking up with people I already knew.

Such a good and healthy turnout and participation are themselves real achievements, particularly at a time when the movement is going through some reflux and many people are feeling a bit down. The Croydon and TWT comrades should be proud of themselves and other organisations should try to learn from what they did and their experience.

Most importantly, there was also some good and useful discussion. To compare it to the Birmingham event again, it wasn’t that the formal agenda was dramatically better. In fact, it shared some of the same problems.

At both events, NHS activists aside, there was a distinct lack of people involved in important struggles speaking. That might be more explicable at a local event, except that there are some very important important things going on in South London – the Picturehouse strikes, the Forest Hill School fight, most noticeably in Croydon Southern Rail. These were absent, even where there was a session they could easily have fitted into, eg transport.

There were clearly people there involved in many different campaigns, but few stalls to promote campaigns, despite a lot of space. That seems like a missed opportunity.

There generally seemed to be a bit of a not-very-radical flavour to the speakers. For instance, one session was run by people from the Unite-sponsored think tank, CLASS, both of whom voted for Owen Smith! I’m not sure what to make of the problems flagged up in the last three paragraphs – I suspect it reflects some nervousness in the The World Transformed of the radical-socialist and in particular Trotskyist-influenced left, which shaped the choice of speakers, but that could be wrong.

I also thought that some of the workshops could have been better conceived or directed: for instance, the one on “One day without us” sort of drifted into a general discussion of migrants’ rights, with intriguing and important aspects about how migrants’ rights relate to strikes, labour organising and so on rather buried.

However, Croydon TBC benefited, firstly, from not pretending to be something it wasn’t – it was a discussion event, not a discussion event pretending to be a “conference”. In Birmingham the lack and even prevention of strategic discussion about Momentum and Labour’s future was glaring. Moreover, the sessions in Croydon were not run in such a way as to prevent meaningful political discussion from happening. There was perhaps in some cases a bit of overuse of breaking into groups – in the NHS session we could have done with more time for whole group discussion – but in general there was plenty of time for and no OTT attempts to control contributions, and so discussion flowed quite freely, with the result that a lot more came out that rose above the level of repeatedly stating the obvious (or allegedly obvious). That made the event.

The last thing I’d like to comment on is that I think The World Transformed comrades are, at best, very much overdoing the “moving beyond the binary of Leave and Remain” stuff. Listening to the discussions in Croydon confirmed that for me. Of course “Leave” and “Remain” as political labels don’t tell us that much and obscure as well as clarify a lot of things; and of course we need to unite people in social and democratic struggles, regardless of how they voted in the referendum.

Part of being able to do that, however, is challenging the dominant narratives which drove the Leave victory, ie nationalism, anti-migrant sentiments, a perversion of people’s desires to have more control in their lives into a form which will actually result in everyone except our rulers having less control. We cannot, or should not, get away from the need to atta ck and oppose Brexit and what it represents.

Workers’ unity, migrants’ rights, opposition to nationalism, international solidarity and a constant aspiration to greater international links – all these things are essential to building a movement which can unite us to “really take back control”. They were not lost at Croydon TBC, very far from it, but I’m not convinced its official pitch was the right one to maximise them. I’m not saying the event had to be officially “anti-Brexit”, but perhaps there is a danger of people being so concerned to promote dialogue, and to do it in a particular way, that the threats posed by Brexit fade in their concerns.

Having said that, I want to finish by reiterating that it was a good event. If this article seems like it contains a lot of criticism, it’s actually because I think there’s a lot to learn from the day so I’m trying to think it through and spell out my conclusions. I’m sorry I didn’t get more people from Lewisham and elsehwere to go down. If you can make it to an upcoming Take Back Control event, do it and help continue the discussion.

• For upcoming Take Back Control events, see takebackrealcontrol.com
• For the agenda for the Croydon event, see here