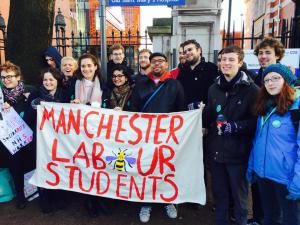 Recently, the former Co-Chair of Manchester Labour Students wrote a piece about her experiences of the culture in the club and criticising the Students’ Union response.

The SU will be writing a response about the actions of staff, so I will refrain from commenting on those accusations, but the politics needs to be responded to by someone on the left of MLS.

Misogyny is common in the left and the Labour Party, as it is in society. I would guess that all women involved in politics for a year or more have been ignored or talked over in meetings. Some of us will have had our politics reduced to those of our (male) partners or friends. Women in positions of power tend to get singled out for special abuse. This must be condemned in the strongest terms. Men especially have a duty to examine the behaviour of themselves and their comrades.

The fact that Ally was subjected to press harassment and rumours around her sex life is terrible. Ally’s article was the first I had heard of, and from discussion amongst my comrades involved over the last year I have determined that the rumour was not widespread, but that will be no consolation to a woman undermined in this way.

Ally is correct when she says that in September, Labour was a house divided. MLS had a large influx of new members, but the leadership seemed to view these people as a threat and not an opportunity. Labour Students was shut down as a democratic organisation, delaying elections even for positions where students had graduated, and became a door-knocking shell. As we have written before in The Clarion, “they insisted on a narrow electoralism which they believed was counterposed to basic democratic functioning, discussing political ideas and organising alongside workers.” ( can you link to the article?) I believe it was this which was unwelcoming to new members.

The Labour Left Students for Corbyn meetings were open and informal meetings. It is strange to call them ‘alternative’ meetings because they were the only meetings of Labour students in Manchester at the time. All were welcome, and indeed the second meeting attracted a number of the committee, who disrupted it with claims of bullying. In fact what they were subject to were reasonable and consistent demands for democracy from the members: that MLS should function as a democratic body with members’ meetings and timely elections.

We approached committee members in person at meetings and around campus to discuss the issues. We were told that the committee didn’t meet or control the society in any meaningful way, and that there would be no meetings of MLS until after the Oldham by-election had ended. We thought this was unacceptable and continued to argue for changes, convincing a number of those who didn’t fall cleanly into the Blairite or Socialist boxes of our democratic aims. In December, elections finally took place. The right of Labour Students might consider the campaign that led to this harassment, and indeed the lack of an open forum meant much of our pressure was shown online or in brief conversations around campus, but it was neither unjustified nor misogynistic in character.

Extensive attempts to refuse to let members have a say in the group’s direction continued into the Spring term. The early open meetings we forced through were chaotic, with little direction from Chair and Secretary, who frequently ignored the room of members to whisper between themselves. They primarily consisted of lots of confusion, lots of shouting and lots of disbelief at the self-important attitudes of the committee. Over the year, as we implemented some basic democratic rules, the atmosphere significantly improved. Members now meet monthly to discuss and vote on their own agenda. This month, despite panic about non-members attending, we were able to have a calm and clear debate about the Boycott, Divestment and Sanctions campaign.

I have been on the committee, and now I am a normal member. The atmosphere in Manchester Labour Students is no longer toxic, because the source of the “toxicity” – a closed and exclusive culture, run by a clique of friends – has gone. The “toxicity” has also broken down because some of the worst people are leaving university. New members have little knowledge or understanding of the fights that took place, and are willing to work together on the leftist, social democratic consensus we have built. We have a club with a high level of engagement and a democratic culture. There will continue to be major political disagreements between Ally and myself, but the changes the left argued for will mean we can have them in the open.