The political climate has been rocked in County Durham to such an extent that it evokes memories of 1984/5. 1,000 people took to the streets of Durham on Saturday 25 March to express their solidarity with 2,700 Teaching Assistants who are at risk of having their pay cut by the council. But this time there is no Margaret Thatcher to rail against. A Labour-controlled council is imposing this 23% average pay cut. The effects on local politics have been devastating for Labour, causing a huge cleavage between the grassroots members- who have overwhelmingly been disgusted by this action from day one- and the Labour councillors who are up for re-election in May. Nowhere is the need to reform the Labour Party by giving members a greater say more clear. On the ground, the situation for Labour in May appears poor. A whole host of Independent candidates and local parties have espoused the TAs’ cause, seemingly dropping their right-wing politics and discovering the labour movement overnight. The ugly side of populism is rearing its head in County Durham.

It’s no wonder that the TAs’ campaign has provoked such an emotional response in this heartland of trade unionism. The Teaching Assistant workforce is over 95% female and is already paid much less than their counterparts elsewhere in the region: a Stockton HLTA (Higher Level Teaching Assistant) earns £20,000-£23,000 a year whereas a Durham HLTA earns between £16,000 and £18,000 per year. After this already low income is cut many TAs will be plunged into poverty. Their courage in fighting this devastating cut has led Aditya Chakrabortty to compare them to the Grunwick strikers, calling them “the Lions of Durham.” 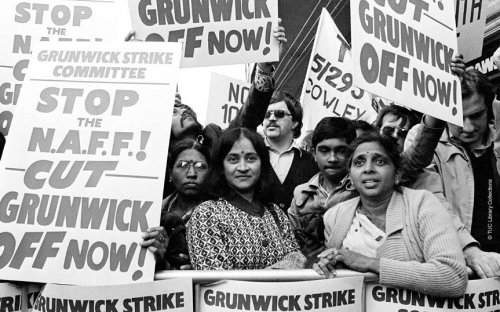 Yet the public has found little sympathy for the Labour councillors who voted for the pay cut. They cite two reasons for their decision: austerity but mostly legality. The first argument is that government cuts, which have adversely affected areas like Durham, mean that the council cannot afford to continue to pay the TAs at their current rate. Yet this fails to answer the questions of why they are attacking the Teaching Assistants so specifically and does not address the fact that other authorities are paying their TAs at a much higher rate. It also falls flat in the face of Labour’s consistent failure to oppose austerity until the election of Jeremy Corbyn. When Ed Balls said “I am afraid we are going to have to keep all of these cuts” back in 2012, it was indicative of the capitulation that Labour made to the Conservatives after the 2007 financial crash and it has come to haunt Labour here in 2017.

The legality argument is more complex. The council blames the threat of equal pay claims for the cut since Teaching Assistants are paid for 37 hours of the week for the whole year, despite the ‘local agreement’ that they have with the council stipulating that they work for 32.5 hours per week and 39 weeks per year. Yet this issue was dealt with by the Tory Barnet council back in 2004 and was not addressed by Durham County Council’s regrading in 2012. Concern about the TAs was kicked into the long grass. Moreover, the fact that Durham County Council returned to the negotiating table after strike action back in November and suspended their threat to fire the TAs on New Year’s Eve and re-hire them on New Year’s Day makes a farce of the argument that legal consequences forced their initial decision.

The council will soon be offering a new settlement, and County Durham Labour members are hopeful that it will represent a fair deal. However, it might be too little, too late for Labour in the May elections. Fierce competition has been provided by the Independents and local parties who have capitalised on the anger felt towards the council by attending and speaking at the Teaching Assistants’ events. Labour is the party of the labour movement. It felt hopelessly wrong that at the last TA demo the Labour Party was being berated in the Durham Miners’ Hall, the home of trade unionism and the great fight against Thatcher. The fury of the Teaching Assistants and their supporters at the 57 councillors who voted for the dismissal is understandable.

Opposition to Labour is certainly not uniform and many TAs were enthused by Jeremy Corbyn telling the council to “get it sorted” at last year’s Durham Miners’ Gala. Yet some of the loudest supporters of the Teaching Assistants are those who have expressed racist and homophobic views in the past until they suddenly became champions of the labour movement. Candidates with UKIP-esque politics are standing against Labour and yet they are being lent support by some TAs. Most of the new candidates had never supported workers’ rights until now and their presence was missed on picket lines. Even the Lib Dems are winning support from the TAs because they voted against firing them: we all know their record on pay cuts. Nevertheless, they are seen as alternatives to the party of the working-class by working-class people all across County Durham. It is something that ordinary Labour members should feel a responsibility to address.

What can we do? Labour members in the North East have made a good start by passing motions of support in four Constituency Labour Parties (Blaydon, City of Durham, and Darlington and North West Durham) and selecting a handful of council candidates who have supported the Teaching Assistants from the beginning. It was encouraging to see these candidates recognised on the doorstep from standing on picket lines. Supporting workers like these is a first step in re-establishing trust between Labour and the working-class and to replicate it across the country Labour members must become more active in their local parties. Many people, including many people who voted for Jeremy Corbyn assumed that a socialist leader would immediately create a socialist Labour Party. Many TAs themselves are baffled by the discontinuity between a leader who has offered his support to them and a Labour council group which has overwhelmingly voted to fire them. Local Labour parties must select representatives that share the anti-austerity commitments of its leadership. It is not enough just to preach from on high.

There are certainly positive results from this explosion of grassroots activism. Like the Deliveroo and Uber riders, the TAs have played the leading role in organising their campaign in ways that conventional union activism does not encourage. As well as hosting rallies and demonstrations, the TAs have sung carols and had picnics to fight their pay cut. It’s fun, loud and it has captivated their audience in County Durham. So many excellent and creative activists have been created in this campaign, something that bodes extremely well for the future of the labour movement.

Now it’s time to seal the future of the Labour Party. We have won the leadership battle twice; now we must win victories for a socialist agenda in our CLPs. Solidarity to the TAs!