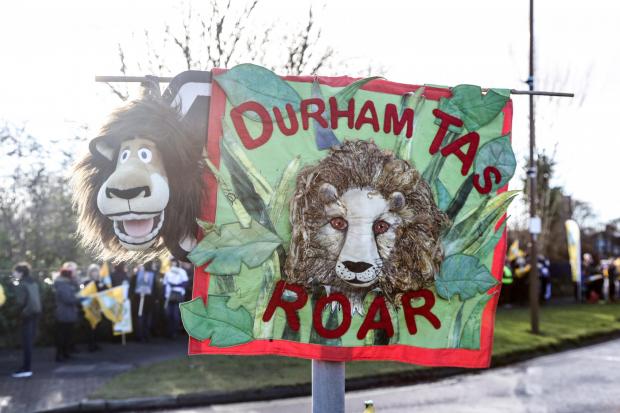 On Saturday 25th March, the city of Durham witnessed over a thousand women, men and children marching in solidarity with the Durham Teaching Assistants and their campaign to defend their pay and working conditions.

The ‘Durham Lions’ as they are known have fought a grassroots campaign resisting the attacks against them for the past 18 months.

2,700 Durham TA’S received official notice on 15th November 2016 from the Durham Labour County Council that their pay was to be cut by 23% and that they were effectively going to be sacked on 31st December 2016 and re-employed on new contracts on 1st January 2017.

The date that the letter was received marked the 25th year of TA service of Lisa Turnbull, one of the main activists of the campaign. Lisa had said that there had been rumours prior to the announcement but that this was the catalyst which determined their action. The real effect of this was that the majority of TAs, many already low paid working class women would face a pay cut of up to £5,000 a year. The TAs reacted quickly to this. A grassroots campaign was initiated – they had decided enough was enough.

The campaign however broad consists of a group of women who have become union members if they weren’t before, the majority of which are Unison members. Many of these women have not been politically active before, but they are now! These women are at the forefront of their own campaign: organising rallies, holding talks with their unions, speaking at public meetings and instrumental in their own industrial action.

These self proclaimed Lions will not allow their families to suffer the effects of the Labour County Council cuts passed down from the Tory Government and they will continue to fight for the difference in education which their profession calls for.